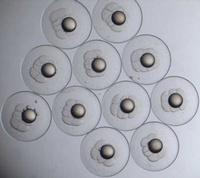 The barrel egg collector receives water drawn from the surface of the tank. (Photo: Yann Gublin) Aquaculture, like any other type of farming, requires stocks that perform well. Land-based farmers have selectively bred their best-performing animals for centuries and continue to improve stock performance through selective breeding programmes. Some fish farmers, however, still rely on wild parents to produce stock for the farm with no way of knowing whether the resulting offspring will be fast-growing or slow-growing. NIWA scientists are working to change this and have established broodstock development programmes for two key aquaculture species: yellowtail kingfish (Seriola lalandi) and hapuku (or groper, Polyprion oxygeneios). Critical to this process is the ability to breed (spawn) the fish in captivity and identify the best-performing individuals.

At Bream Bay it’s spawning time for our large marine finfish broodstock. For most of the year either hapuku or kingfish are breeding. Changing seawater temperature and day-length triggers the urge to breed and these cues are specific to each species; hapuku spawn in late winter to early spring, followed by yellowtail kingfish in late spring to summer. Both species are communal batch spawners. At Bream Bay, our males and females swim together, the males closely pursuing the females as they cruise around the large tank. When a female is ready, she releases her eggs into the water; then the pursuing male or males release their sperm and the eggs are fertilised. The fertilised eggs float and are removed by egg collectors that receive and filter the water from the top of the broodstock tank. After each spawning event, technicians collect and assess the quality of the eggs. We incubate the resulting fish embryos in specially designed tanks, where they hatch into larvae.

In a breeding programme it’s important to know who’s mating with whom, but how can we tell which females and males are mating when they’re all together in one tank? This is where our detective work begins.

From close up, we can identify broodstock individuals by their external tags, plus we use underwater cameras to record mating behaviour. However, as sperm is released the water goes cloudy and it’s very difficult to identify specific individuals in the frenzied activity of spawning. Then there’s also the problem of the sneaky males who rush in at the last minute to fertilise some of the eggs. So we need a tool that we can use once the eggs have been collected to determine the parents of particular egg batches and thus determine who just spawned.

What we need to determine parentage is some clue in the fertilised egg that is sufficiently variable so that we can identify individual parents. This is where DNA can help. Each fertilised egg contains DNA inherited from both parents. Some parts of the DNA are highly variable among individuals, so we can use the presence of a specific pattern of variation (DNA profile or ‘genotype’) to identify individual male and female parents. NIWA is working with AgResearch to develop such DNA markers, called microsatellites. We can extract DNA from an individual egg and then genotype it using about eight different microsatellites. From the resulting genotype we can determine the parents of the egg and who spawned that particular day. If we analyse multiple eggs from multiple collections, we get a picture of what’s happening in the tank over the whole spawning season.

By combining the parentage analysis with data on egg, larval, and juvenile quality, we build a picture about which parents consistently produce good-quality offspring. These parents can be targeted for production to ensure the aquaculture industry receives only the best quality stocks for farming.

Once the best (elite) males and females have been identified, we want to be able to establish specific crosses between these individuals. This means placing a single male and female into a tank and then allowing them to breed (known as ‘pair mating’). Until 2008 this had never been tried with kingfish or hapuku, although scientists overseas had success pair mating Atlantic cod. We did not know whether large broodstock animals that normally spawn in communal groups would still exhibit normal breeding behaviour and release gametes.

Early last year we placed a single pair of kingfish, which we knew were spawning, into a tank by themselves and closely monitored their behaviour. This pair produced fertilised eggs, but only once. We tried again in early 2009 with two pairs of kingfish in separate tanks and repeatedly collected fertilised eggs from both pairs. This is a major breakthrough for our programme as we now know we can mate specific pairs, and so elite individuals can be crossed to produce selected stocks for the aquaculture industry.

Fish have many different mating systems, including:

Fertilisation of eggs most commonly takes place externally (oviparous, e.g. kingfish and hapuku) but in some species eggs are fertilised and held internally until the young are born live (ovoviviparous).

Kingfish and hapuku are iteroparous (capable of reproducing multiple times during their life) serial batch spawners, which means they release gametes more than once during a single spawning season.

This research is part of NIWA’s ‘High-performance Aquaculture Broodstock’ programme funded by the Foundation for Research, Science and Technology.