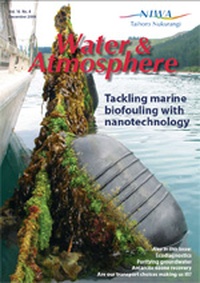 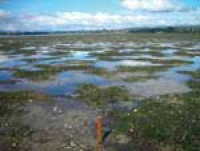 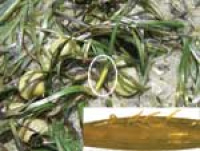 The inflorescence in a shoot of Zostera muelleri includes an arrangement of male and female flowers. (Photos: Fleur Matheson)

Scientists from NIWA, in collaboration with researchers at the universities of Waikato and Toulouse (France), have discovered seagrass flowering in Tauranga Harbour. This appears to be one of very few times when flowers of Zostera muelleri, an indigenous marine plant, have been recorded in New Zealand, and flowering is considered to be quite rare in this species. Perennial seagrasses are thought to reproduce mostly asexually (by vegetative growth and fragmentation) as opposed to sexually (by flowering and seed production).

The Tauranga specimens were discovered by Virginie Dos Santos in samples she collected for her doctorate research investigating damage to seagrass meadows caused by black swan grazing and pollution. The flowers came from a dense, exposed, intertidal seagrass patch on estuarine sandflats near the centre of the harbour. The only other account from the North Island is also from Tauranga Harbour, where flowers were collected between 1942 and 1964 from seagrass in tidepools in the upper harbour.

Our research team will study this flowering event in Tauranga Harbour more closely this summer and we’ll also look for flowers and seeds at our other North Island research sites. We hope to learn more about the factors that trigger flowering in Zostera muelleri.

This research and discovery were made possible through funding and support from Environment BOP, Environment Waikato, the Foundation for Research, Science and Technology, and the Department of Conservation. 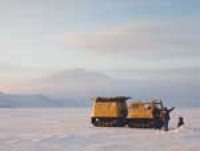 Scientists travel by Hägglund all-terrain vehicle to reach one of their drilling sites, about 5 km from Scott Base. (Photo: Natalie Robinson, NIWA/University of Otago)

In September, scientists from NIWA and the University of Otago flew to Scott Base on Antarctica New Zealand’s first post-winter flight. Their aim was to study the growth and thickness of winter coastal sea ice in McMurdo Sound. They spent six weeks on the ice setting up a pilot study for an eight-month research project which will begin in February and run through the 2009 winter until October.

Sea ice is a critical part of the Southern Hemisphere climate. It moderates atmospheric temperature changes by ‘locking up’ energy as it freezes, disrupting the ocean–atmosphere exchange of heat and moisture. Studies predict there will be a 34% decrease in annual mean sea ice volume in the Southern Ocean in the next century.

The thickness of the sea ice determines its strength, its ability to withstand and dampen the impact of waves, and controls the energy required to melt the ice. Sea ice thickness also has a direct impact on the multimillion-dollar toothfish industry and ship-based Antarctic tourism operators, because it affects navigation.

NIWA marine physicist Mike Williams says winter sea ice is one of the least understood aspects of the high latitude climate system, as simply gaining access to the ice is difficult during the winter.

“Satellites can detect the extent of sea ice year round, but don’t measure its thickness,” says Mike. “To study that we need to be in Antarctica. The relative ease we have in working in McMurdo Sound is because of the support we get from Antarctica New Zealand and the Scott Base staff. During this spring study we installed a long-term underwater mooring in the southeast of the sound to record oceanographic data on things like ocean currents, temperature, and salinity.

“The information we gather during next year’s study will help us answer critical questions directly related to sea ice extent and thickness – especially how it affects climate change. We will also be able to understand how the ice influences industries working in the area by answering questions about how sea ice affects them. For example, access for fishing would be easier if there was less sea ice, but as the base of the food chain relies on the sea ice, fish stock could conceivably be reduced.”

The research is a part of a collaborative project between NIWA, the University of Otago, Industrial Research Limited, and Victoria University of Wellington. It is funded by the Foundation for Research, Science and Technology as part of its support for International Polar Year (IPY) research.