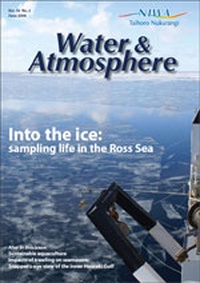 The light band shows a deep gouge in soft sediment near the summit of a seamount; this was probably made by a trawl door. (Photo: DTIS, Malcolm Clark) 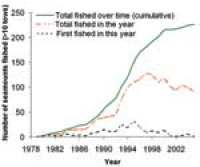 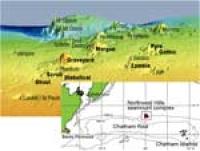 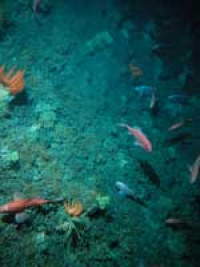 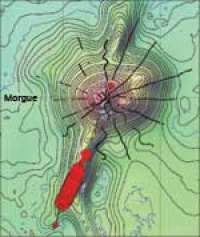 Malcolm Clark recounts how scientists at NIWA are investigating the effects of commercial trawl fishing on some of New Zealand’s most productive submarine landscape.

Lying beneath the waters around New Zealand are over a thousand seamounts, knolls, and hills. They are often sites of flourishing sea life, with spectacular reefs of cold water corals and large sponges, and have become the focus of important commercial fisheries for such deepwater species as orange roughy, oreos, black cardinalfish, and alfonsino. However, the benthic (seabed) habitat can be fragile, and heavy bottom-trawl gear can easily damage the coral. Because these corals may be long-lived and slow-growing, their recovery from trawling could take many years, if not decades. Knowing the environmental effects of fishing on the seafloor habitat is an important component of fisheries management.

Since 1999, NIWA scientists have been studying the effects of trawling on seamounts, looking at a number of aspects of seamount fisheries and ecology. Using NIWA’s extensive bathymetric database and recent multibeam surveys, first we determined where seamounts are found, and their physical characteristics. Then we looked at fisheries data to see theextent of trawling on these seamounts. We ran compare-and-contrast surveys on a small group of fished and unfished hills to determine the likely nature of impact, and began a series of surveys on a previously fished seamount to examine recovery over time from trawling. Finally, we’ve investigated age and growth of corals to understand their likely resilience to disturbance by trawling.

How much trawling and where?

We used data from MFish to determine which seamounts have been fished, how often, how heavily, in which direction, and for what species. Based on these data, we’ve developed several combined indices to describe the importance of a seamount to fisheries, and the relative amount of fishing (and hence impact) on a seamount. The main fisheries that target seamounts are those for orange roughy, black cardinalfish, and oreos (especially smooth oreo).

The number of seamounts fished has changed over time. Fisheries on seamounts around New Zealand first developed in the early 1980s, but the amount of fishing on them increased rapidly in the early 1990s as the association between some species and seamounts became clear, and as navigational accuracy improved dramatically, for example through the introduction of GPS. The number of seamounts fished each year is now around 100, or 10% of the known number. However, the percentage of seamounts that are fished in particular depth ranges – such as depths suitable for orange roughy – can be much higher.

There are two common approaches to investigate the effects of fishing. The first is to experimentally trawl or dredge in areas that are not commercially fished and then compare the communities before and after. The second is to compare fished and unfished areas with similar habitat, which is the more common as it doesn’t involve deliberately destroying habitat. We have been carrying out such a study on a group of small seamounts on the northern Chatham Rise, commonly known as the Northwest Hills. This region has been heavily fished over the last 10 years, but effort has focused on just a few of the seamounts. This gives us a natural setting to examine seamounts in very close geographic proximity, of a broadly similar size, depth range, and elevation, that have been fished to varying degrees. In 2001 we completed a survey to describe the biodiversity of seamount fauna and study the effects of fishing. We found a strong contrast in the extent of coral cover between fished and unfished seamounts, distinct differences in the composition of species communities, and physical evidence of previous trawls in the form of gouges and scours on the seabed.

Age and growth of coral

One strand of study has been determining the age and growth rates of bamboo corals which are regularly found on seamounts in New Zealand waters. Some of this work was reported in Water & Atmosphere in 2003. We used ring counts from thin sections, electron microscopy images, and radio isotope analysis. The study indicated that these corals could be at least 50 years old, and have a relatively slow growth rate of 2–3 cm per year, which could mean large corals are several hundred years old. Their resilience to fishing may be low. Now we're beginning the challenging task of resolving ages of reef-forming and multi-branching stony corals.

We undertook a second survey of the Northwest Hills in 2006, covering the same fished and unfished hills from the 2001 survey. One of the important changes since the earlier survey is that three of the hills have since been closed to trawling; one of these, called Morgue, was heavily trawled in the past. Fisheries data show that commercial fishing trawls have run in many directions on Morgue, with the exception of south to southwest. During the 2006 survey we made intensive photographic transects in a radial pattern around the hill, including one in a south-southwest direction down the line of a ridge-like lava flow, where trawling has not been reported. We recorded dense stands of a cold-water coral similar to those found on the nearby unfished seamounts. This indicates that, despite heavy fishing, the rugged slopes on this one side had provided a refuge for corals which were likely to have been much more widespread before fishing began. The survey also revealed a patchy distribution of small stylasterid corals (also known as hydrocorals) that appear to have colonised areas of the seamounts between the two surveys. We plan further surveys to monitor changes in the sea life after trawling has ceased.

Dr Malcolm Clark is a fisheries scientist who studies seamounts and their biodiversity. He is based at NIWA in Wellington.