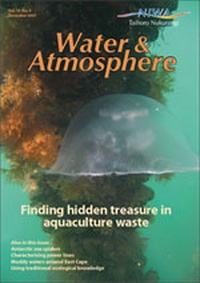 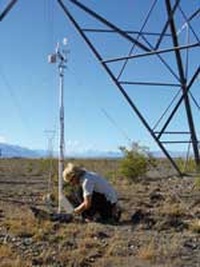 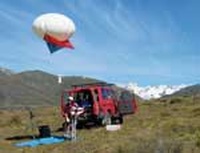 Tony Bromley sends up the Helikite near Lake Tennyson to record a vertical profile of wind and temperature. (Photo: Ross Martin) 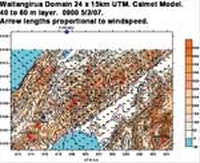 Sample output from the CALMET model shows wind conditions during a 10-minute interval within a 20-m-thick layer.

The power lines covered in the 2007 survey and a detail showing the temporary met stations and Helikite sites in the upper North Island.

Electricity flows from power station to consumer via power transmission lines, and thousands of kilometres of line are used to carry power throughout the country. As the demand for electricity increases through population and industrial growth, there is an obvious need to ensure that this network will operate within the limits for which it was originally designed, at all times and under all conditions.

Sound engineering practice dictates that transmission lines are operated within conservative limits and with minimal risk of lines overheating because of high loads. Increasing consumer demand for electricity underscores the need to understand and manage the conditions under which more power may be transmitted safely and reliably through the existing transmission networks.

The amount of power that can be safely transmitted through a line is limited by how hot the line gets. The temperature of a transmission line depends mainly on the amount of electric current flowing through it – which generates unwanted heat – and local weather conditions: air temperature, direct heating from the sun, and the cooling effect of wind. As the line temperature increases, the line expands and sags. Sagging reduces the clearance between the line and trees, buildings, or the ground, and excessive sag can cause electrical, physical, or operational hazards. If the line temperature gets high enough to soften the line material, then the line may suffer permanent damage.

As a part of grid maintenance, Transpower commissions airborne laser surveys (ALS) to accurately measure the location and characteristics of segments of the transmission network. In recent years, NIWA scientists and technical staff have provided meteorological support for some of the surveys conducted by Power Systems Consultants (PSC) as the primary contractor.

The mission and the instruments

For the aerial surveys, the contractors used a helicopter-mounted LiDAR (laser ranging instrument) to locate the position of each line relative to the helicopter, and a high-precision GPS (global positioning system) to determine the absolute position of the helicopter. They recorded the exact location of points along each conductor cable from a height of about 300 m above the transmission line. This technique accurately measures the line position to within a few centimetres.

During the over-flights, NIWA staff gathered high-resolution meteorological data in the vicinity of the lines, using permanent met stations within the National Climate Network supplemented by more than 20 temporary surface stations. Each temporary station logged wind speed, wind direction, and air temperature from sensors on a 2.5-m mast. Several of the stations included a solar radiation sensor. We also used an instrument package tethered to a Helikite to record the vertical profile of wind and temperature several times each survey day at intervals along the line being surveyed.

We then incorporated these data into a specialised model to determine the weather conditions close to the conductor cable at the time of the survey. Our objective was to get a realistic estimate of the meteorological conditions during the helicopter laser scan at the mid point of every surveyed span over a range of heights above and below the conductors.

For the 2007 campaign, specialist teams from NIWA collected the meteorological data. One team operated the Helikite for the vertical profiling, while the second team focused on the daily installation, data download, and decommissioning of the temporary met stations. The vertical profiles were measured as frequently as possible during the aerial survey. Data from the temporary stations were required from before dawn until at least an hour after the helicopter survey was finished for the day. The two teams ‘leapfrogged’ each other along the day’s chosen survey line, usually covering several hundred kilometres each day. The temporary stations for each day’s survey had to be installed the day before, and this necessitated careful logistical planning.

Typically, we assessed 400 line spans in a day; on one exceptional day the NIWA team monitored and modelled over 700 spans. Each day’s met data were collected from the portable weather stations, sent to NIWA in Wellington, and fed into CALMET, a numerical model in  use internationally for air-pollution studies. The model created  meteorological fields in three dimensions: at 10-minute intervals, over a 100-m horizontal grid, at heights of 10, 30, 50, and 70 m. We used CALMET to generate a vertical meteorological profile for each transmission line span. The model took into account the effects of terrain and land use (such as forest, pasture, or lake), which can affect the wind fields in different ways. The effects of larger-scale weather systems are also important, so we started CALMET running for the beginning of each day using real and modelled meteorological data, as is used in weather forecasting. CALMET outputs the data for every 10-minute interval over the full survey period.

Transmission lines are designed for reliable operatio nunder worst-case weather conditions. By combining our meteorological modelling with the data from their laser survey, line operators are able to form a picture of how each surveyed line performed during known weather conditions and predict how it would behave at all times under all load and weather conditions.

From power to pests

The same CALMET model is being used for biosecurity, such as in dispersion studies for predicting the spread of significant diseases. For example, in 2006 it was used to compile a risk atlas for foot and mouth disease in New Zealand. The model has also proved useful during campaigns to eradicate insect pests – from fire ants to painted apple moths – that threaten New Zealand’s horticulture and forestry industries.

Getting power to the people

Jeremy Bulleid and Graham Elley work with NIWA Instrument Systems in Christchurch and Tony Bromley works at NIWA in Wellington in the field of atmospheric emissions. Dr Tom Clarkson, formerly of NIWA in Wellington, is now a private contractor. For this project, NIWA was subcontracted by Power Systems Consultants (PSC), who are based in Wellington, and the LiDAR surveys were conducted by their project partner Opten Ltd (Russia).