On the lookout for tectonic faults and underwater landslides 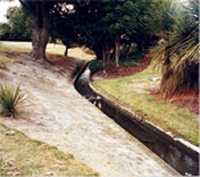 This acoustic profile of the seabed between White Island and the Bay of Plenty coast illustrates some of the 300 active submarine faults identified by NIWA within the tectonic rift that extends from Lake Taupo to north of New Zealand. 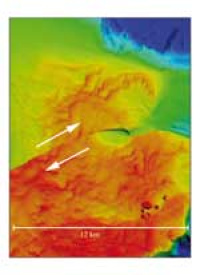 Seafloor image of the Boo Boo Fault (the sharp break across the image) displacing the seafloor in southern Cook Strait. Arrows show the direction of movement. 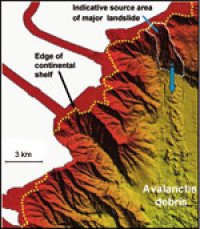 Giant landslides, such as this example at the edge of the continental shelf off Gisborne, may represent a significant, but as yet untested, tsunami hazard.

Because New Zealand straddles an active tectonic plate boundary, our coastal communities are vulnerable to earthquake and tsunami hazards. Philip Barnes and Geoffroy Lamarche explain how NIWA scientists are learning more about the sources and impacts of large-magnitude earthquakes and giant landslides off our coasts.

The collision between the Pacific and Australian tectonic plates has a profound impact on the geological structure and landscape of New Zealand and its surrounding ocean floor. For the people living along the coast, the effects of the collision are of riveting importance, and the resilience of coastal communities to earthquake and tsunami hazards depends on their readiness to deal with the effects. To be prepared, the public, coastal land-use planners, engineers, insurers, and emergency managers require robust information and modelling of the hazards and associated risks. NIWA scientists are undertaking a range of fundamental studies aimed at identifying seafloor instabilities, active faulting, and potential sources of earthquakes and tsunamis off our coasts.

To get high-resolution images of the seabed and underlying tectonic faults, we survey our continental margins using state-of-the-art seafloor mapping and subsurface profiling technology available on NIWA’s research vessel Tangaroa, as well as on other vessels of opportunity. With these data sets we can map the distribution and types of active faulting, identify the connection of faults from land to offshore, and analyse the rates at which the plates are deforming. Such studies are underway along the length of New Zealand from the volcanic ridges north of the Bay of Plenty to the southern Fiordland margin. From these studies we can identify and quantifypotential geological hazards associated with catastrophic events such as earthquakes and submarine landslides.

The Pacific and Australian tectonic plates are colliding across New Zealand at a rate of about 35 to 50 mm per year.

The zone of active deformation on both sides of the plate boundary is several hundred km wide, and there are hundreds of geological faults onshore and offshore. The direction and rate of convergence of the plates changes along the length of New Zealand. Consequently, the types, mechanisms, and rates of faulting vary substantially from region to region, along with the hazard. For example, in the Bay of Plenty, complex patterns of normal faulting and volcanism occur along with geothermal systems and frequent earthquakes within a rift several tens of km wide. (The M6.5 Edgecumbe earthquake of 1987 is an example of normal faulting.) Through recent surveys, we’ve discovered over 300 faults on the seafloor in the Bay of Plenty, which collectively represent more than 150 separate sources of submarine earthquakes. We’ve modelled some of these faults to evaluate the potential tsunami hazard associated with a seafloor rupture during an earthquake (see ‘Tsunami sources in the Bay of Plenty’).

Along the eastern North Island (Hikurangi) margin, the Pacific Plate is being thrust westward underneath the North Island, where it dives down into the earth. This subduction zone is characterised by thrust faults and large earthquakes (such as the M7.8 Hawkes Bay earthquake of 1931 that levelled most of Napier), and the tectonic deformation extends up to 150 km off the east coast. In the South Island, where the direction of plate convergence is more oblique than in the north, Cook Strait, Marlborough, and the Southern Alps are characterised by extensive strike-slip faults (up to hundreds of km long) which have ruptured repeatedly in very large earthquakes in prehistoric times. These include the Alpine Fault, which extends along the Southern Alps and Fiordland continental margin, and the Boo Boo Fault in Cook Strait.

By integrating seafloor bathymetric data and geophysical profiles of the faulted sediments and rocks beneath the seabed, we can determine the location, geometry, and size of the faults, and the amount and rates of fault displacement. We can then use this information to estimate the size, location, and likely occurrence of potential earthquakes. This type of information is required in models designed to calculate the earthquake hazard and the levels of ground shaking that can be expected at a given site. NIWA geologists have been working closely with hazard scientists at GNS Science to improve the current models of earthquake hazard in New Zealand, as well as with NIWA ocean modellers to evaluate tsunami hazard.

New Zealand’s rainfall and mountainous landscapes provide great volumes of muddy sediment – at some of the highest rates on earth – to our active continental margins. These sediments can produce very large landslides when shaken severely during earthquakes. These offshore features are commonly 100 to 1000 times larger than on land, and a concern is whether catastrophic failure of the seabed could generate tsunami waves that could inundate the coast during or shortly after earthquake ground shaking.

As NIWA has acquired more high-quality seafloor images, we’ve begun to realise just how widespread landslides are, and how important they are in shaping our undersea landscape. They appear to be particularly common on the flanks and around the heads of large submarine canyons, such as off eastern Marlborough, in Cook Strait, and along the eastern North Island margin. They are commonly on the scale of several km in width, but some giant avalanches involve areas of many hundreds of km2. Our aim is to understand their distribution, sizes, ages, and types of collapse, and use this understanding to develop robust models of tsunami hazard and risk.

What dangers lurk beneath the sea?

Thrust faults accommodate shortening of the crust, and push the rocks on one side of the fault onto the other side, typically resulting in uplifted ridges and mountain ranges.

Dr Philip Barnes and Dr Geoffroy Lamarche are marine geologists with special interest in plate tectonics, continental margins, and seismic hazard. They both work at NIWA in Wellington.