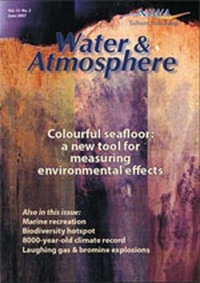 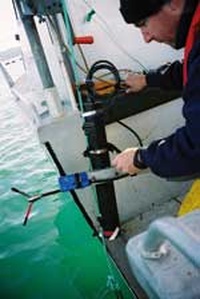 How do giant kelps manage to hold fast under crashing waves? Where do you look for a missing diver who’s drifted away? How can you extract energy from ocean currents? Wellington physicist Craig Stevens finds that his insight into biomechanics and boundary-layer physics takes him across disciplines to work in projects as diverse as marine ecology, climate, aquaculture, oceanography, and energy. In the past decade he’s been involved in an enviable five projects supported by the Marsden Fund, the premier source of investigator-driven, ‘blue-sky’ research in the New Zealand science scene.

Where are you from and how did you become a scientist?

I was born in Adelaide and grew up there mainly, although I started my schooling in London. My parents were an engineer and teacher who, discovering I was unlikely to make it as a professional football player, encouraged me with things like the first home computer (this was a while ago), a chemistry set, and an analogue synthesiser. So I was writing programmes and doing signal processing even as a spotty youth. I hid the chemistry set.

What degrees do you have?

I have an engineering undergraduate degree from the University of Adelaide and my PhD was in the field of environmental fluid mechanics, supervised by Jörg Imberger at the University of Western Australia. My postdoctoral work was at the University of British Columbia with Gregory Lawrence, extending some of the ideas from my PhD and also branching out to look at biophysical processes in boundary layers.

When did you come to NIWA and what’s your job?

My partner and I had had enough of the northern hemisphere and NIWA was hiring, so we moved to Wellington in 1996. I’m in the Marine Physics Group at NIWA’s Greta Point campus. I see my job as doing – conceiving, conducting, publishing, and promoting – useful science that fits into present priorities, as well as developing new ideas that might guide future priorities. Over-planning science is, by definition, limiting and doesn’t serve the funder well.

What’your favourite part of the job?

There’s nothing quite like being in the field doing something that not many people get to do. For example, developing a picture of seawater salinity beneath sea ice by following (not too closely) in the footsteps of Scott’s first Antarctic voyage, except using skidoos.

I also love the first time the data start to unravel and take on a life of their own, beyond what we thought might happen. Like when we were aboard the Tangaroa off Norfolk Island and data downloaded from a floating mooring revealed that we’d been sitting above internal waves 80 metres high that were squeezing and stretching the biology below like a concertina.

When the research paper from the work is almost done, before the flaws become more obvious, you feel like you’re making an advance. Papers might seem like highbrow, boffin, ivory-tower stuff, but they’re the only reliable measure of quality we presently have. Thanks to Wikipedia, anyone can use big words and colour pictures – there has to be substance!

You work on a lot of different projects. Is there a unifying theme?

Most of my work is essentially the science of boundary layers, where we look at how biogeochemistry is influenced by turbulence, stratification, and waves. Fluid mechanics doesn’t particularly care how funding is divided up, so much of my research spans the large ocean research programmes and I get to work with a variety of people at NIWA, at universities, and other CRIs.

In climate research we look at the ocean–atmosphere exchange of CO2, and how ice platelets form and aggregate beneath Antarctic sea ice. In ecosystems programmes we look at transport of individuals (as small as larvae or as large as divers); for example, we’re studying flow and eddies around Kapiti Island to understand transport processes (see ‘Putting the physics in coastal biophysics’). Aquaculture sustainability seeks answers to the same questions, but focused on mussel production. Also there is a thread on how waves influence behaviour of objects as varied as baby seaweed or devices for extracting wave energy.

Perhaps the only work I’m involved in that is pure physics is to do with extracting energy from tides or waves – marine renewables research – which I’ve summed up for the Royal Society’s Gamma educational series.

So you see promoting marine physics as part of your job?

The underpinning role of physics in the world around us tends be ignored or else assumed to be known, so I think it’s worth raising the profile of the discipline and highlighting what we think we do and don’t know. Hence the recent Gamma, and an Alpha is in development. I’ve also contributed an article for Te Ara, the online encyclopaedia, and a video promotion for the International year of Physics on the HotScience website.

Find out more about the world of physics with these online resources: