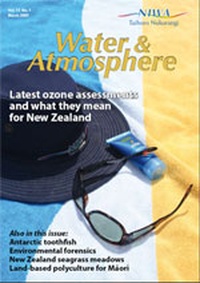 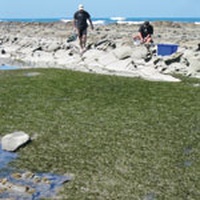 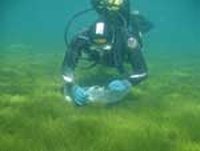 NIWA scientists are on a mission to discover the role and importance of seagrass in New Zealand marine ecosystems. Mark Morrison, Meredith Lowe, Keren Spong, and Nicola Rush outline what they’ve found so far.

Seagrass meadows are known to play a number of important ecological roles in estuarine and shallow-water coastal ecosystems: they enhance primary production and nutrient cycling, stabilise sediments, elevate biodiversity, and provide nursery and feeding grounds for a range of invertebrates and fish. New Zealand has primarily one species of seagrass, Zostera capricorni, which grows mainly in the intertidal zone; there are also limited populations growing at sheltered subtidal areas with very clear water (the maximum depth recorded is 7 m). Seagrass grows throughout New Zealand, from Parengarenga Harbour in the very far north, down to Cooks Inlet at the bottom of Stewart Island. It is found at many types of coast, from sheltered estuaries and coastal beaches, to intertidal coastal reef platforms, to subtidal bays around coastal islands.

As in many other regions around the world, New Zealand’s seagrass meadows are at risk from human activities, especially from increased sedimentation and reduced water clarity associated with runoff from land-use. Over the last 100 years, extensive areas of seagrass have been lost from many locations, including the Whangarei, Manukau, Waitemata, Tauranga, and Avon-Heathcote estuaries. Subtidal seagrass has been most affected; for instance, 90% of the subtidal seagrass in Tauranga Harbour disappeared in the years from 1959 to 1996, with an overall decline of 34% of seagrass cover; and almost all of Whangarei Harbour’s 12 km2 of seagrass was lost in the 1960s, including subtidal areas.

Encouragingly, there has recently been some resurgence of seagrass in the Auckland region, with seagrass expanding or re-establishing in parts of the lower Kaipara Harbour, and at Snells Beach and St Heliers Beach in the greater Hauraki Gulf. There are still extensive seagrass meadows in a number of New Zealand harbours; these include Parengarenga, Rangaunu, Kaipara, Kahwia, Tairua, and Tauranga in the North Island, Wanganui Inlet, Farewell Spit, and Bluff Harbour in the South Island, and Paterson Inlet in Stewart Island.

A search for values

NIWA scientists are conducting a three-year research programme to quantify the relative ‘values’ of seagrass at regional and national levels. Our goals are to better understand the role that seagrass meadows play in New Zealand’s nearshore ecosystems, and to provide resource managers with improved habitat-management tools. We’re trying to answer several questions.

In the summer and autumn of 2006, we sampled seagrass meadows in four biogeographical regions: west Northland, northeastern New Zealand, Nelson/Marlborough, and Southland, as well as on the intertidal reef platforms at Gisborne and Kaikoura. Where possible, within each region we sampled a seagrass meadow from a small and a large estuary, a coastal intertidal reef platform, and a coastal island. At each location, we collected small fishes with a fine-mesh beach seine (except on the reef platforms), small invertebrates with cores, and larger invertebrates and plants with strip transects. We also counted birds. This sampling was repeated for an adjacent area of bare sediments. Data from this extensive sampling will help us assess the relative ecological values of the different meadows.

In northern New Zealand, estuaries with seagrass (especially subtidal) had high densities of juveniles of at least six fish species, in comparison to adjacent bare sediments. On the west coast of Northland, small snapper, trevally, and garfish dominated the fish found in subtidal meadows, while juvenile grey mullet were associated with intertidal meadows. On the east coast, subtidal meadows supported higher numbers of juvenile snapper, along with parore, spotties, garfish, and triplefins, while intertidal meadows had much lower numbers of these species (but still higher than surrounding bare sediments). Conversely, subtidal seagrass meadows at offshore islands, such as Urapukapuka Island (Bay of Islands) and Slipper Island (Bay of Plenty), had very low densities of juvenile fish, although Slipper Island supported high densities of a pipefish species not found in adjacent mainland estuaries.

South of Cook Strait, snapper, trevally, grey mullet, and parore approach the southern limit for their adult distribution, and this was reflected in the scarcity of juveniles in this region’s seagrass meadows. We found relatively high densities of spotties in many meadows, such as those of Wanganui Inlet and the inner Marlborough Sounds, but not at Farewell Spit. Such patterns extended into Southland, with the addition of juvenile leatherjackets and a pipefish species.

These preliminary findings demonstrate that the accepted paradigm that seagrass meadows provide important juvenile finfish nurseries does not hold across all locations, but needs to be carefully evaluated with respect to factors such as whether the meadow is intertidal or subtidal, its coastal setting, and its regional context. We’re still compiling our invertebrate data. Other work at NIWA discusses the small invertebrates in the next article: Does seagrass contribute to marine biodiversity?

Once all of our samples have been processed, we’ll use the data to construct relative value rankings for the different seagrass combinations: latitude, region, coastal setting, and depth. These will be assessed from a number of different perspectives, such as their relative value as nursery grounds, whether they support economically valuable species, and their contribution to biodiversity.

Early next year, we’ll hold a workshop as part of this process, so that resource managers and other interested groups will have the opportunity to tell us what would be most valuable to them, from a management perspective. A final report will appear in the Ministry of Fisheries’ Marine Biodiversity Biosecurity Report series, which is publicly available.

Is the (sea)grass always greener?

Turner, S.J.; Schwarz, A. (2006). Management and conservation of seagrass in New Zealand; an introduction. Science for Conservation 264.Department of Conservation. 90 p.

Dr Mark Morrison works with fisheries ecology and habitats, Meredith Lowe is completing a PhD at Auckland University, Keren Spong and Nicola Rush are marine technicians. They are all based at NIWA in Auckland.

They thank those who have contributed to this programme, including Dane Buckthought, Glen Carbines, Ashmita Gosai, Jacquie Reed, and Matthew Smith (NIWA) and Andrew Baxter, Paul Buisson, Beverley Freen, and Don Neale (Department of Conservation). This work is funded by the Ministry of Fisheries Biodiversity Fund project ‘Seagrass Meadows as Biodiversity and Connectivity Hotspots’.

Teachers’ resource for NCEA Achievement Standards or Unit Standards:
Biology Level 1 US6294, AS90162, Level 2 AS90460
See other curriculum connections at www.niwa.co.nz/pubs/wa/resources