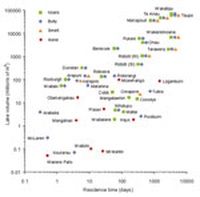 The graph shows residence times and lake capacities and which fish have developed land-locked populations in each lake. 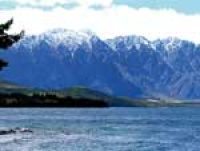 Lake Tutira has a residence time of 744 days, or about 2 years. (Photo: NIWA Aquatic Plant Group)

Lake Arapuni has a residence time of about a week. (Photo: Aleki Taumoepeau)

Wairere Falls has a residence time of half a day. (Photo: Jacques Boubée)

How much water does a fish need and how long does it need it? Jody Richardson and Alistair McKerchar combine some NIWA databases to learn more about native fish populations and their habitat requirements.

As New Zealand’s population increases, so does our demand for fresh water – to drink, to produce electricity, and to irrigate crops. This means many rivers and streams may be scrutinised for their developmental potential, including the feasibility of building dams to create large storage reservoirs. But dams can block the migrations that many of New Zealand’s native fish make between the sea and fresh water to complete their life cycles. However, some migratory species can also form land-locked populations provided there is a lake downstream. In these cases, the lake provides conditions similar to the sea for rearing the early life stages.

Residence time is how long water takes to travel through an impounded water body, such as a hydro lake or a reservoir. We wondered if residence time influences the development of land-locked populations of certain native fish species. If water moves quickly through a lake, then there might be more risk of larvae washing downstream and out of the system, or perhaps the food supply for larval fish might be affected. Low residence times might also affect the quantity and quality of spawning habitat for some species, particularly if combined with large fluctuations in lake level.

To investigate the influence of residence time on land-locked fish populations, we chose three commonly occurring native fish that readily form such populations – koaro (Galaxias brevipinnis), common bully (Gobiomorphus cotidianus), and common smelt (Retropinna retropinna) – and compared their presence or absence with residence times for a range of natural and man-made lakes. We went to the New Zealand Freshwater Fish Database to get koaro, bully, and smelt data for 40 lakes with significant downstream obstacles (either natural or man-made).

This particular set of lakes was selected because water volume information was available for them from the Inventory of New Zealand Lakes, the New Zealand Dam Inventory, and other sources. To calculate residence times, we divided lake volumes by their mean discharges, as assessed from flow records or estimated from the River Ecosystem Classification database. We then looked for significant differences in the residence times of lakes with and without populations of our three fish species.

Residence times for our set of 40 lakes varied from a matter of hours for some of the hydroelectric reservoirs to more than 10 years for some of New Zealand’s large natural lakes. As we expected, there was a strong correlation between lake volume and residence time, with small lakes having significantly shorter residence times than large lakes.

Residence time was also a good predictor for smelt populations, with lakes containing them having significantly longer residence times on average (1777 days) than lakes without (320 days, Kruskal-Wallis P = 0.015). Smelt were usually missing from lakes if residence time was less than 400 days, and always absent if the lake was also small (less than 20 million cubic metres). However, smelt were not found in a number of large lakes with long residence times in the upper Waitaki and Clutha catchments, probably because they were not present there naturally and have never been liberated to establish a food source for trout.

Common bully were found in 25 of the 40 lakes, but there was no relationship between residence time and the presence of bully populations within this set of lakes (Kruskal-Wallis P = 0.458). However, volume was a significant predictor, with lakes containing bully being larger on average (9050 million cubic metres) than lakes without bully (20 million cubic metres, Kruskal-Wallis P = 0.0003). Why this should be so is unclear, but, for some of the small lakes with medium residence time, it might reflect competition with, or predation by, the local koaro populations.

So, what’s going on?

The larval habits of these species partially indicate why residence time influences their ability to form land-locked populations. Larval bullies in lakes are typically found as a layer in water 5 to 20 m deep, and tend to move vertically up and down at dawn and dusk. Koaro and smelt larvae are more widely dispersed through the water column, and are larger and better swimmers than bullies. They may be sensitive to flows or currents within lakes, moving both horizontally and vertically to avoid currents. Small lakes with low residence times are likely to have more current flowing through them and therefore may be less suitable for koaro and smelt larvae.

Our analysis indicates lake residence time can be used as a guide to predict whether land-locked populations of koaro and smelt can become established, but that lake volume and other factors, such as having suitable spawning sites or competition between species, might also influence their presence. A larger database might help us understand the relationships, but establishing a larger database may be limited by a lack of data on lake water volumes.

Jody Richardson works with native freshwater fish at NIWA in Hamilton and manages the New Zealand Freshwater Fish Database. Alistair McKerchar is based at NIWA in Christchurch, where his research includes hydrology and water resources.

Teachers’ resource for NCEA Achievement Standards or Unit Standards:
Biology Level 3 AS90716, US8933
Science Level 3 US8153
See other curriculum connections at www.niwa.co.nz/pubs/wa/resources