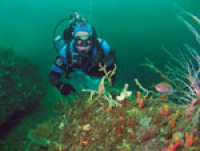 In the hunt for new compounds, divers collect samples of a wide variety of marine plants and animals ...(Photo: Mike Page) 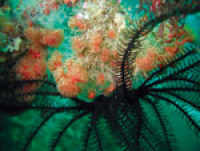 ... such as these crinoids (feather stars) and ascidians (sea squirts) found on black coral in Doubtful Sound. (Photo: Sean Handley)

Samples are sorted first on board, then classified, catalogued, and dissected back in the laboratory. (Photo: Pete Notman)

They are then screened to unravel their chemical composition. (Photo: Alan Blacklock)

Success story: part of the structure of an anti-inflammatory compound TerraMarine has isolated and purified from a New Zealand sea sponge.

Scientists are once again turning to nature in search of new medicines. Fiona Proffitt reports on the TerraMarine partnership’s hunt for new anti-inflammatory drugs among New Zealand’s unique terrestrial and marine biota.

TerraMarine Pharmaceuticals is a three-way partnership between NIWA, Crop & Food Research, and the Malaghan Institute for Medical Research. Formed in 2002, the collaboration aims to develop non-steroidal anti-inflammatories from native plants, animals, and micro-organisms.

Worldwide demand for anti-inflammatories is growing because of ageing populations, and advances in medicine that have linked more and more medical conditions to inflammation. The market for non-steroidal anti-inflammatories in the US alone was estimated at US$3.4 billion (NZ$5.4 billion) in 2002. TerraMarine is initially focusing on treatments for gout, a type of inflammatory arthritis that affects about one in twenty New Zealanders.

Going back to nature

Natural remedies have been used for millennia and about half the drugs on the market today originally came from natural sources. Aspirin, for instance, which is a type of anti-inflammatory, was originally derived from willow bark. However, in the 1970s and 1980s, the trend was to develop new drugs in the laboratory, using a process that mixed and matched thousands of combinations of compounds before testing them for their therapeutic potential. But the pipeline of new drugs from this ‘combinatorial chemistry’ technique has almost dried up, and pharmaceutical companies are once again turning to nature.

Nature abounds with potent chemicals that protect organisms from disease, predators, and competitors (particularly useful for organisms that can’t move away from harm, such as plants and sponges). The chemicals include venoms of tropical sea snails that have been harnessed for painkillers, and defensive chemicals found in sea sponges, now showing promise as anti-cancer drugs. The beauty of these natural compounds is that they have already been tested for their potency over millions or billions of years of evolution.

Being home to many unique organisms, New Zealand and its surrounding seas provide a rich hunting ground for new medicinal compounds. NIWA holds samples from a huge variety of marine organisms, including fish, shellfish, sponges, sea squirts, seaweeds, and deep-sea bacteria. Our expert taxonomists are skilled in identifying the organisms we collect, which is crucial if you want to collect more of the same species. We also have expertise in aquaculture, enabling us to farm potentially useful organisms, rather than harvest them from the wild.

Crop & Food Research provides a complementary collection of terrestrial plant samples, knowledge of farming options for many plants, and expertise in the chemistry of natural products. The Malaghan Institute brings specialised screening capabilities and expertise with animal models of disease. TerraMarine is also sub-contracting some of the chemistry and drug formulation work out to laboratories in Otago and Auckland Universities, as well as engaging with two prominent clinicians who work in the anti-inflammatory area and who can assist with clinical trials.

The hunt for natural anti-inflammatories

Over the past few years, TerraMarine has screened more than 2000 extracts from a huge variety of native organisms, ranging from algae to trees, and marine bacteria to sponges. Each sample can potentially hold several hundred different chemicals, so they have to be put through a series of screens to see which, if any, have anti-inflammatory properties.

The chemists among the team then get to work on isolating the active compounds and working out their chemical structure so that they can be synthesised and altered to make them more effective. Synthetic chemistry is a very important part of drug development, especially as the vast majority of drugs on the market are manufactured. Side chains may be added or removed to make the compounds easier to store or more readily absorbed by the body, or to reduce any potential side effects. The most promising compounds and their synthesised versions are then tested for their effects on living tissue, both on cultured cells and in laboratory animals.

From discovery to patent

TerraMarine has already identified two promising anti-inflammatory compounds from marine organisms. The first of these was patented in September 2005, and is now being refined to improve its effectiveness and usability. The next step is to study what the compound does when in the body, including how fast it enters the bloodstream, how long it remains in the body, and how it is excreted. Knowing these things will help determine the correct dosage and how best to develop the compound into a usable drug. The second compound is undergoing further development before TerraMarine applies for a provisional patent.

Owning a patent means that TerraMarine effectively owns the rights to use the chemical structure of the compound for a particular purpose (for example, as an anti-inflammatory drug) for 16 years, when it will become public property. So the race is now on to develop it into an effective and safe anti-inflammatory drug.

Drug development is a relatively slow and uncertain process. On average, it takes 10–12 years to get a drug to market, and the vast majority never make it. But with two promising compounds already in the pipeline, and a large store of samples still to test, we hope that TerraMarine can develop new treatments for diseases like gout from New Zealand’s treasure trove of natural resources.