Creating the right conditions for paua 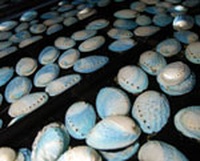 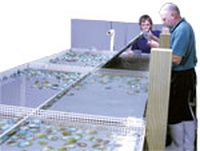 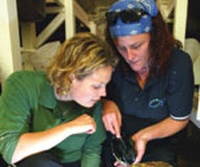 NIWA has developed a system of farming paua (New Zealand abalone) that produces higher growth rates than conventional systems. Phil Heath is working closely with the aquaculture industry to find the right conditions for this valuable shellfish.

Paua aquaculture has excellent potential for New Zealand because of strong overseas demand and high prices (more than $60 a kilogram). Our paua aquaculture industry owes its existence to research and development of techniques for hatching paua by NIWA scientists during the 1980s. The industry had hopes that annual paua production would reach 100 tonnes – and well over $5 million – by the end of the ’90s, but by 2001 it was still producing only 2 tonnes of paua per year.

In 2002, responding to concern that paua aquaculture was not reaching its full potential, NIWA switched focus from producing baby paua in hatcheries to the challenges of growing paua on to marketable size. The key issues for paua farmers were slow growth rates due to low temperatures in winter, and poor or variable water quality. Our scientists turned to recirculation technology to solve their problems.

Paua had previously been grown in flow-through systems: large volumes of seawater are pumped directly from the sea through the tanks in which the animals are held. It is expensive to constantly heat the water in these systems, only to return it to the sea. In contrast, recirculation systems retain, clean, and reuse the water, adding only a small amount of new water each day. These systems offer control of not only water temperature, but also water quality; they cleanse the small volumes of new water required each day more thoroughly than is possible in flow-through systems.

Despite this early success, growth rates within the prototype system were not significantly better than those being achieved by industry. Because the specific water-quality requirements of paua were unknown, we had based our prototype system on designs for culturing fish. To design a more appropriate system for paua, we next turned our attention to their environmental requirements. Our research identified two key factors: oxygen and pH.

Like many abalone species, paua are not efficient at pumping water over their gills. Studies overseas have shown that lowering oxygen levels even slightly reduces growth rates in abalone. Maintaining high oxygen levels within the system is, therefore, essential. In shallow raceways, the paua depend purely on water flow to bring the oxygen they require. Understanding this has allowed NIWA to design systems that maintain high oxygen levels for the animals at all times.

Carbon dioxide (CO2) released by the paua dissolves in seawater, forming acids that lower the pH, or acidify the seawater. Although fish can tolerate pH levels as low as pH6.5, water this acid dissolves the shells of paua. De-gassing systems to remove the CO2 go some way to offsetting this, but are not efficient at high pH. We found that we had to add alkaline substances, such as baking soda, to the water to counteract the effect of CO2 and keep pH levels in the range suitable for paua culture.

At East Land Aquaculture, the recirculation system is consistently producing high growth rates, with paua taking just 26 months to reach a market size of 75 mm. Similar or better results have been reported by OceaNZ Blue Paua. These consistently high growth rates are well above the reported summer growth in flow-through systems.

These early successes point to the potential for recirculation systems to play an important role in the more rapid development of an abalone aquaculture industry in New Zealand. The technology developed between NIWA and our industry partners since 2002 is now attracting interest worldwide. The message from our research is clear: recirculation technology must be designed to meet the requirements of specific species. Systems designed for freshwater do not work well for seawater, and fish recirculation systems do not work well for paua. Paua have much higher water-quality requirements than many marine fish, and culture systems must be designed to meet these requirements.

Although working systems have been developed, there is still some tweaking to be done to provide an off-the-shelf design with guaranteed performance figures. NIWA and our industry partners are now working toward that goal, and to provide investors with the confidence they need to enable the onshore paua farming industry in New Zealand to fulfil its potential.

For more information, contact the author at [email protected]