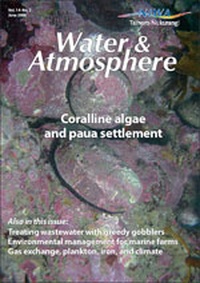 Average effect of the positive SAM on New Zealand daily rainfalls (above) and daily maximum temperature (below). (Click on the maps for more detail.)

We certainly know it when a southerly from Antarctica blows across New Zealand; Jim Renwick and David Thompson are investigating how the South Pole affects our weather in more subtle ways.

The Southern Annular Mode (or SAM) is a ring of climate variability that encircles the South Pole and extends out to the latitudes of New Zealand. (Its counterpart, the NAM, centres on the North Pole and affects climate in the northern hemisphere.) The SAM involves alternating changes in windiness and storm activity between the middle latitudes, where New Zealand lies (40-50° S), and higher latitudes, over the southern oceans and Antarctic sea ice zone (50-70° S). In its positive phase, the SAM is associated with relatively light winds and more settled weather over New Zealand latitudes, together with enhanced westerly winds over the southern oceans. In the opposite (negative) phase, the westerlies increase over New Zealand, with more unsettled weather, while windiness and storm activity ease over the southern oceans.

How the SAM works

The SAM was first identified in the 1970s. On a week-to-week basis, it flips between states – causing either windier or calmer weather over New Zealand latitudes – in an unpredictable way, apparently at random. Though these phase changes of the SAM cannot be predicted more than a few days in advance, once changed, the phases tend to persist for several weeks.

In recent years, scientists have noticed a trend in the SAM towards more periods of the positive phase, with a tendency towards strong westerlies over the southern oceans and lighter winds over the middle latitudes. The trend appears to be related to the Antarctic ozone hole, and the influence of the stratosphere on the weather lower down. The question is: what effect is this having on weather and climate in New Zealand?

Tracking down trends in New Zealand

During the summer of December 2005-February 2006, we examined rainfall and temperature data from stations around New Zealand, looking for days when the SAM was strongly positive or strongly negative. Then we compared daily climate statistics over New Zealand for the two extremes of the SAM.

Our initial results suggest some striking effects on New Zealand climate, consistent with the kinds of wind and pressure changes outlined above. The maps above show the average difference from normal in precipitation and temperatures measured at weather stations during the positive SAM phase. The data reveal lower than normal rainfall and higher than normal temperatures throughout western parts of the North and South Islands; these rainfalls and temperatures are consistent with the weaker than normal westerly winds in those regions. We found precipitation was as much as 5 mm less per day over the west coast of the South Island, and temperatures were at least 0.5°C higher in a broad region stretching from Auckland to the western fiords. The negative SAM phase would show the opposite picture, with cooler and wetter conditions in the west of both islands. These temperature and precipitation anomalies in the western half of the country are statistically significant, but the effects along the east coast of the country are weak and are not statistically significant.

This research will continue during 2006 as part of a new study supported by the Marsden Fund on connections between the SAM, the ozone hole, and El Niño. A key aspect of the project will be to assess the role of the SAM and the Antarctic ozone hole in recent trends in New Zealand climate.

Ringing in the changes

Dr Jim Renwick studies climate variability and is based at NIWA in Wellington. Dr David Thompson came to NIWA as a Visiting Scientist from Colorado State University in Fort Collins. He has carried out extensive studies of the annular modes and their effects in both hemispheres.

Teachers’ resource for NCEA AS: Science Level 1 US18981, Level 2 US6352, Level 3 US8153. See other curriculum connections at www.niwa.co.nz/pubs/wa/resources