More than just a crab hole 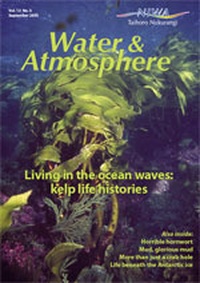 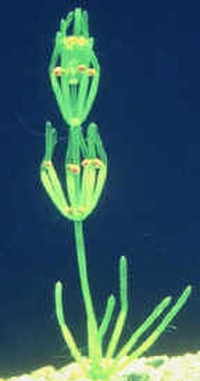 A fertile specimen of C. corallina. (Photo by J. Clayton)

The fragile microelectrodes are inserted into the mud in 0.1 mm increments. (Photo: K. Vopel)

Kay Vopel and Nicole Hancock explore the labyrinth of burrows beneath mangrove mud and describe the vital chemistry within.

Mangrove trees trap fine sediment brought in by rivers and the tide. This sediment is the home of various bacteria, algae, protozoa, and invertebrates (such as marine worms) that cope well with the challenges of an intertidal mudflat, including the risk of desiccation, overheating, oxygen deficiency, and regular exposure to air and hydrogen sulphide. These organisms modify their environment and interact with other organisms by exchanging materials in the form of food, waste material, and respiratory gases. However, some larger species are especially important in the ecosystem. Going beyond these relatively straightforward transactions, they alter the nature of the sediment in ways that affect organisms other than their direct competitors, predators, or prey. Ecologists call such species 'ecosystem engineers' because they create new habitats and change the availability of nutrients to other species.

One New Zealand example of an 'ecosystem engineer' is the tunnelling mud crab, Helice crassa. This species is abundant in the muddy upper parts of our estuaries and is often associated with mangroves. Tunnelling mud crabs create unique habitats for the bacteria that provide nutrients for the primary production of both mangrove trees and microscopic algae. Furthermore, these crabs can enhance the export of nutrients into the coastal zone.

Mangrove mud is often honeycombed with a network of interconnecting passages, occupied by a population of mud crabs. When we stand on the mudflats, the labyrinth of burrows is rarely obvious, but it is revealed at low tide by the amount of water that flows out of crab holes and by the way the rising tide often wells out of crab burrows long before it starts advancing across the surface of the mud. Such burrows can be compared to arteries: the water flowing through the burrows rapidly transports dissolved materials, such as oxygen, through the sediment. Oxygen molecules are transported from the burrow water across the burrow wall and into the surrounding black anoxic (oxygen-free) sediment via diffusion. This process creates a unique habitat for certain bacteria responsible for the cycling of one particular important nutrient, nitrogen.

The nitrogen cycle in mangrove mud

Nitrogen is an important nutrient because its availability often regulates primary production. The availability of nitrogen in mangrove ecosystems depends on a complex pattern of bacterial activity within the anoxic mangrove mud, the thin oxic (oxygen-containing) zone at the visible surface of the mud, and the inner oxic linings of animal burrows. Bacteria transform nitrogen in organic material into free ammonium, nitrate, or gaseous nitrogen through three processes: ammonification, nitrification, and denitrification (see box below). These processes are closely linked with each other wherever oxic sediment meets anoxic sediment; such conditions occur at some depth below the visible surface of the mangrove mud and around the burrows of mud crabs.

What’s so special about crab burrows?

The crabs can exert considerable influence on the primary production of coastal ecosystems by modifying the form of recycled nitrogen and by shunting regenerated ammonium out of the system through denitrification. Whether there is a net export of ammonium, nitrate, or gaseous nitrogen from the burrow system depends on the balance of nitrification and denitrification in the burrow wall. Predicting this balance is not straightforward because the coupling of the two microbial processes is mediated by a complex set of factors, including the intensity of the flushing, the burrow geometry, and activity patterns of the inhabiting crabs.

Our example shows how research on the interactions between the physics of water movement, the activity of bacteria, and the ecology of crabs can improve our understanding of nutrient cycling in New Zealand’s coastal and estuarine ecosystems. Incorporated into whole-system models, this knowledge can help predict the consequences of local, human-induced effects or of future scenarios of large-scale environmental change.

What’s going on down there?

Nitrogen cycling in a crab burrow

This cross section of a crab burrow depicts part of the nitrogen cycle. In both the oxic (oxygenated) and anoxic (oxygen-free) zones, particulate organic material (dead plant and animal matter) is decomposed by bacteria. During the decomposition, nitrogen in the organic material is transformed to ammonium (NH4+). This process is called ammonification.

The bulk of ammonium is oxidised by aerobic bacteria, first into nitrite, then into nitrate ions (NO4-). This process is nitrification.

Nitrate then diffuses from the oxic layer, back into the anoxic layer. Here its fate depends on circumstances. Nitrate may be taken up by bacteria and mangrove roots and become unavailable. Or it may be reduced by bacteria in the anoxic zone of the sediment into either gaseous nitrogen (N2) or nitrous oxide (N2O). This process is denitrification. Gaseous nitrogen is likely to diffuse through the mud into the atmosphere.

Dr Kay Vopel is a benthic ecologist with a special interest in biogeochemistry and animal-sediment interactions in coastal ecosystem. Nicole Hancock works in the benthic ecology team. They are both based at NIWA in Hamilton.