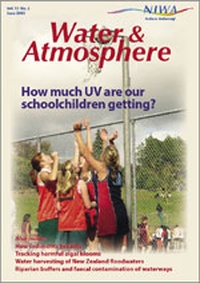 From pristine alpine tarns to slime-filled lowland streams, the great outdoors is Cathy Kilroy’s favourite laboratory. Since joining NIWA in 1992 as an editor and a science technician, she has logged as much time as she can investigating fresh waters in situ. However, diatoms – the organisms she studies with greatest interest – aren’t readily visible until she gets them under a microscope back at work in Christchurch.

We nabbed Cathy when she descended from her field site at Bealy, near Arthur’s Pass, to find out how she’s combined a science career with her passion for tramping and the New Zealand wilderness. W&A – What are your favourite spots for tramping?

Cathy – I really like both alpine and bush settings. As part of NIWA’s aquatic biodiversity programme, I had a permit to collect specimens from DOC lands to add to the diatom archive that we maintain in Christchurch. A few years ago when we were tramping in Stewart Island, a colleague and I discovered some new diatoms. We had the pleasure of naming them and describing them for the first time, so Stewart Island remains a particular favourite.

W&A – What’s so great about diatoms?

Cathy – Once you get them under the microscope, they’re really pretty, with beautifully sculptured cell walls made of silica. You identify them by those beautiful shapes. Diatoms are good indicators of environmental conditions because the make-up of the diatom community (the assortment of species) changes depending on what’s going on in the stream or lake. They can be used in palaeolimnology because their silica cell walls are preserved in sediments, so by studying diatoms in sediment cores you can work out what the environment was like thousands of years ago.

W&A – Not all your work is so lofty: what’s it like wading around in slime?

Cathy – Everyone should try it! The reason we do it is because changes in periphyton (slimy algae) reflect changes in a stream’s hydrology and water quality, so it’s a way of monitoring what’s happening with the water. It gives a fuller picture than the ‘snapshot’ you might get with a single water sample. 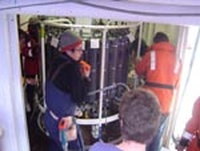 Fragilariforma cassieae, one of the diatoms Cathy and her colleague Liz Bergey discovered on Stewart Island and described for science. (Photo: L. Bergey)

Cathy – Several years ago NIWA and Federated Farmers got together to find a way for farmers to easily check the health of streams on their properties. MfE funded the work. The result was SHMAK – Stream Health Monitoring and Assessment Kit. With the kit, non-scientists can check things like water clarity, temperature, pH, and which invertebrates live there. After SHMAK was developed, we also worked with NZ Landcare Trust to promote the kit to community groups. There’s now a Māori version as well. You can order the kits from www.niwa.co.nz/ncabb/tools/shmak/.

W&A – How did you get into science (and diatoms)?

Cathy – I grew up in Wales, and completed a masters degree in zoology at Oxford University. Then I worked for several years with science journals at Academic Press in London. When I’d had my fill of London, I found a position in Port Moresby, in Papua New Guinea, editing a magazine for the Department of Primary Industry (Australian for agriculture). PNG was a great place to live; I enjoyed the climate and my job, which included a lot of local travel. It was there that I first started tramping and also met people doing a lot of interesting science. I decided I’d like to get back into real science someday.

A few years later I found myself in New Zealand, working at the Hydrology Centre in Christchurch as a technical information officer and lab technician. When the centre became part of NIWA in 1992, I began editing its new magazine, Water & Atmosphere. At NIWA I combined editorial and lab work, focusing on algae identification with light microscopy.

A turning point came when I received a couple of technical training grants to attend overseas courses, which further inspired me to pursue my special interest in diatoms. As a result of all this, last year I gave up my editorial work and I’ve begun part-time PhD studies at University of Canterbury.

You can read about Cathy’s work in these past issues of Water & Atmosphere: Cathy’s recent work in subalpine wetlands is featured in a new poster. (Click to enlarge)