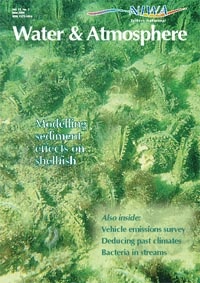 Laboratory trials suggest that mosquitofish could be a potential threat to the whitebait fishery in northern New Zealand.

Gambusia affinis is commonly known as the mosquitofish because it eats mosquito larvae. Gambusia are native to southern and eastern USA, but following translocation for control of mosquitos, they now have an extensive global distribution, including New Zealand. The effectiveness of gambusia in controlling mosquitos is still unclear, and concern is growing over their potential impact on native fish biodiversity.

Gambusia are aggressive predators. They will compete for food, and they can tolerate a wide range of environmental conditions. In addition, populations of gambusia can establish quickly. These fish reproduce rapidly and can produce 3–4 broods a year. Internal fertilisation allows females to retain viable sperm over winter. Therefore, populations can build up during summer even in the absence of males.

Gambusia are found in shallow, still, or gently flowing waters in warmer regions, especially in areas with weed beds. They are not common when summer temperatures are below 20°C. Hence, gambusia inhabit many northern New Zealand wetlands, lakes, and lowland coastal regions of rivers.

The distribution and habitat preferences of gambusia are similar to those of several common native fish such as inanga (Galaxias maculatus), smelt (Retropinna retropinna), and the common bully (Gobiomorphus cotidianus). This overlap in habitat may result in competition with and segregation between gambusia and these native species. If this is the case, then how are the native fish populations affected? In particular, any impact on inanga would be significant as this could affect the important whitebait fisheries at river mouths.

We already know that gambusia caused mass mortalities of the dune lakes galaxiid in several Northland dune lakes and contributed to the decline of these fish (see Water & Atmosphere 6(2): 10–12). They may also have a similar effect on the closely related inanga.

Gambusia vs. inanga – a title fight 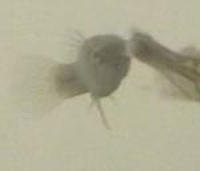 A gambusia attacking the tail fin of an inanga. (Photo: C. Baker) To examine the behaviour of gambusia and inanga, we carried out laboratory trials. We investigated whether gambusia would attack inanga (or vice versa) over the range of water temperatures encountered in the wild, and whether such attacks would affect the mortality of either species.

For each trial, 10 inanga were placed in a glass tank containing 22 litres of water. They were initially separated from 10 adult gambusia by an opaque divider. Controls (inanga but no gambusia) were kept in another tank. After allowing a day or two for the fish to acclimatise to the conditions in the tank, the divider was removed. We inspected all the tanks daily. We noted fish behaviours and interactions, removed any dead fish, and recorded any fin damage. The trials lasted 15 days.

We ran trials using juvenile inanga at four temperatures: 10°C, 15°C, 20°C and 25°C. Trials between gambusia and adult inanga were conducted at a temperature of 15°C.

And the winner is ... gambusia!

Gambusia lived up to their aggressive reputation. They attacked inanga by fin nipping, usually the caudal (tail) fin (see photo). Most deaths of inanga were from the loss and damage to the caudal fin and peduncle (where the caudal fin attaches to the body of the fish). For all trials, there were no deaths or injuries to any gambusia.

The effect of temperature on the average mortality of juvenile and adult inanga held in aquaria with gambusia. 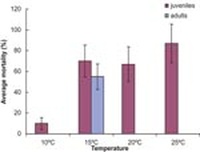 Gambusia attacked both adult and juvenile inanga. In the trials with adult inanga, only about 50% of the inanga survived. At temperatures of 15°C and above, even fewer juvenile inanga were still alive at the end of the trials (see first graph). At 10°C, gambusia were relatively inactive and displayed little aggression towards juvenile inanga.

In these laboratory trials, gambusia were aggressive at lower temperatures than we expected. However, aggression was higher at temperatures over 20°C.

We are now planning field studies to find out more about the impacts of gambusia on native fish populations in the wild. Possible effects include exclusion of native fish from their preferred habitats and/or increased mortality of native fish such as inanga.

Clear evidence of widespread impact, plus an accepted need for control, are both needed before taking the further step of developing ways to control gambusia.

Cindy Baker is based at NIWA in Hamilton.

This research was carried out as part of the FRST-funded programme “Sustainability and Enhancement of Whitebait Fisheries” (C01X210).

The experiments were conducted in accordance with NIWA’s Code of Ethical Conduct for the Use of Live Animals in Research, and was approved by the NIWA Animal Ethics Committee.