Although an ocean apart, Antarctica exerts an icy control on the waters flowing past New Zealand, with effects that are felt from the coast to the deep ocean.

Ever since James Cook sailed deep into Antarctic waters on his second voyage of 1772–75, New Zealand has kept close ties with the “White Continent”. Ross, Shackleton, Scott, Hillary and others relied on New Zealand to help them mount expeditions to the ice. But New Zealand has also fostered exploration and scientific research of its own, particularly with the building of Scott Base in 1957. Such historical links span 230 years, but environmental ties extend far down the path of geological time.

As the ACC developed, it isolated Antarctica making it colder and allowing the ice sheets to expand. Cooling also increased the temperature difference between the pole and equator, causing winds to strengthen. This in turn strengthened the ACC. As the ice sheets grew, nearby waters became colder and denser. They began to sink. The cold water then spread north into the ocean basins. Because the Earth’s rotation forced these currents along the western sides of the basins, they became known as Deep Western Boundary Currents (DWBC). Initially these currents were strong enough to erode the seabed. Off eastern New Zealand, where the DWBC flows into the Pacific Ocean, four such erosion periods have occurred in the past 33 million years, all coinciding with major advances of the Antarctic ice sheets. As the eastward-moving ACC circles Antarctica, it encounters two prominent constrictions: the Drake Passage off South America, and the submarine continent off New Zealand. These constrictions force the ACC to ride well north of its usual path (see inset map). Off southern New Zealand, the interaction between current and seabed is dramatic. As the ACC strikes the Campbell Plateau, large eddies form and migrate north along the plateau edge, stirring sediment in water depths exceeding 3000 m. Water as cold as 5 °C almost reaches Chatham Rise.

Below 2000 m, the DWBC and ACC flow together alongside the Campbell Plateau. But once the ACC leaves the scene, only the deep boundary current passes northwards into the central Pacific.

When the climate and ice sheets of Antarctica change, the signals ripple through the ocean and atmosphere to New Zealand and beyond. The timing and size of the signals, like everything else in nature, are highly variable. Large-scale changes caused by continental drift happen over millions of years, whereas the great ice ages occurred at time scales of tens of millennia. Then there are the more frequent Antarctic-related weather and climatic disturbances, which affect New Zealand on scales of decades to days.

The ice ages were particularly influential. As polar ice sheets expanded, sea level dropped to expose the continental shelf. Off New Zealand the shelf became a shingle-covered coastal plain that was blasted by icy, dust-laden winds. The strengthened winds also pumped up the ACC, part of which branched towards Dunedin bringing cold water close to the ice-age coast. There, coastal currents shifted cold water north as far as East Cape.

And how do we know this? The answer lies in the mud! Sediment cores from offshore Hawke Bay provide a climate record of unprecedented detail. Using the remains of plankton preserved in the sediment, NIWA researchers have compiled a detailed record of the ocean’s temperature. Ice age temperatures at the surface were 7 °C colder than now, and the patterns of change matched those recorded in Antarctic ice cores, thus highlighting the New Zealand– Antarctic connection.

One of the more direct ice-age connections with the “White Continent” was the flotilla of icebergs reaching New Zealand via the ACC. These carried rocky debris, which accumulated on the seabed as the ice melted. Analysis of this debris in sediment cores records repeated iceberg invasions over the millennia. Locally, the northern limit of iceberg invasion was the warm, shallow waters bathing the crest of Chatham Rise. Today, this crest is marked by grooves and pits gouged by entrapped icebergs, while the surrounding seabed is littered with Antarctic debris.

As Antarctic ice sheets expanded, more dense cold water formed to intensify the DWBC. Off eastern New Zealand, cores of mud show silt-rich layers corresponding to the ice ages, when finer grained clay particles were winnowed out by faster currents. A polar connection is also verified by a simultaneous influx of Antarctic diatoms that grew around the sea ice and sank to be entrained by the DWBC.

The repercussions of the faster DWBC on New Zealand were restricted mainly to the deep ocean, but globally it meant a change in the great Ocean Conveyor system with Antarctica taking control while the other great driver, the North Atlantic Ocean, temporarily took a back seat (see “Ocean circulation”).

Superimposed on these large-scale changes are short-term variations like the Antarctic Circumpolar Wave. Occurring about every four years, the Wave is recognised by ocean temperature and sea-ice fluctuations that ripple eastward around the Southern Ocean. The precise nature of the connection with the ACC is not well understood, though the Wave does appear to affect New Zealand rainfall.

Finally, there are those all-too-frequent events: winter polar storms. These disturbances create swell that sweeps north to pound the New Zealand coast en route to fuel the summer surf beaches of Hawaii and California.

All in all, when it comes to feeling the effects of the Antarctic environment, the cliché “It’s a small world” is exactly right. 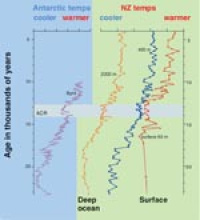 Past temperatures recorded in the West Antarctic Ice Sheet at Byrd Station and in the ocean off New Zealand; the similarity confirms the intimate link between the two sites. ACR is a period known as the Antarctic Cold Reversal. Note how the cooling in the ACR affected Antarctica and both surface and deep waters off New Zealand.

Teachers: this article can be used for NCEA Achievement Standards in Science (1.2, 1.5, 2.5, 3.5). See other curriculum connections at www.niwa.co.nz/pubs/wa/resources

Lionel Carter, Barbara Manighetti and Helen Neil are based at NIWA in Wellington.