The New Zealand Meteorological Service (NZMS) operates a Lightning Detection Network that records the location and magnitude of lightning strikes throughout New Zealand. The number of strikes can vary greatly from year to year and between regions. The NZMS can generate a lightning map centred on any chosen location.

Most lightning strikes are cloud-to-cloud, but on average one in ten discharges to ground. These are the strikes that can damage nearby unprotected electronic equipment.

Many NIWA monitoring sites are in remote locations, often only accessible by helicopter, so site visits can be costly. Lightning-damaged equipment will also inevitably result in gaps in the data record.

The Rose Ridge monitoring station lightning protection system captures lightning strikes, conveys the energy to ground and dissipates it in the grounding system.

The dynasphere air terminal is mounted on an insulated mast and is the highest point on the tower. It provides a target for lightning discharges that might otherwise strike, and damage, the instruments. But the dynasphere is no passive lightning rod – it dynamically initiates an upward streamer during thunderstorm conditions to capture the lightning discharge.The discharge current is safely conveyed to ground through a specially designed insulated down-conductor that contains the lightning’s energy within the cable as it flows to ground, within a few millionths of a second.

To provide effective grounding in the rocky alpine environment the lower end of the down-conductor is terminated with copper ribbon. We fanned this ribbon out into trenches and crevices that we then filled with a special ground enhancement material (GEM). This is electrically-conducting cement that improves the transfer of lightning energy into the ground where it dissipates safely.

We also provided secondary protection – while the primary protection system safely deals with the bulk of the energy from a lightning strike, smaller but still damaging amounts of energy can enter via signal cables. To prevent this, we fitted electronic transient suppression devices to protect the electrical inputs of the monitoring instruments.

Over the first five year period we recorded two direct strikes with no equipment damage. 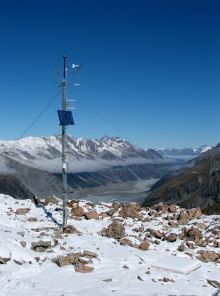 The dynasphere air terminal, mounted at the top of an insulated mast through which the discharge current is safely conveyed to the ground. (Bob Newland)