NIWA has completed the first phase of its national Snow and Ice Monitoring Network (SIN). The network now comprises 11 high-altitude meteorological stations located strategically along the length of the South Island’s Southern Alps.

The monitoring network has been set up to gather information about the extent, seasonal nature, and long-term changes to snow and ice in the alpine regions of New Zealand.

Why do we need to know about snow and ice?

A primary objective of the SIN is to indicate how much water is locked up in snow and ice in New Zealand. If we know how much snow and ice there is at all times, it can help us to understand, predict, and manage the resource and hazards associated with it. Users of the resource, such as hydro-electricity generators, will value data produced by the network; land managers such as farmers and local authorities also will be better able to plan water use and flood protection if they know more about the resource that is stored in the mountains.

How do we estimate the water equivalent of snow?

Each SIN station measures snow depth and density, so we can estimate how much water (Snow Water Equivalent, SWE) would result if it melted.

How do we measure snow depth?

Each station measures snow depth with an ultrasonic sensor.

The snow depth sensor transmits ultrasonic pulses towards the snow surface, measuring the time it takes the echoes to return, and using this measurement to determine the distance to it. As snow falls, the distance decreases, so the sensor measures the depth of the snow as it accumulates.

How do we measure snow density?

When we know the depth and weight of the snow, we can calculate its density, and this tells us how much water is stored in the snowpack.

We installed snow pillows at key locations to record the total weight of the snow. A pillow is three metres in diameter and filled with a food-grade glycol solution that remains liquid at very cold temperatures and transmits the pressure, from the weight of the snow, to an electronic pressure sensor. We record this and convert it to weight.

Where possible, we also measure the level of a lake into which the melt water is flowing.

How do we collect the data?

We measure and record each parameter at each station hourly. Each station transmits its data over a satellite radio link to the Neon data server. The near-real time and historical data on the Neon server is accessible via the Internet.

The SIN is already an important national resource. It has the potential to grow and become even more useful: we plan to install six more stations, including one in the North island. Modern technology is making snow and ice information accessible at comparatively little cost.

Over time, advanced modelling of long-run data produced by the SIN will help us to better understand the nature of seasonal snow throughout New Zealand. This may also provide an important management tool for tourism and other industries that depend on it.

Real-time information on snow density, and the sequence of recent snowfall/melt events, could one day lead to a semi-automated ‘Avalanche Warning System’, for improving safety in the mountains.

Longer term, changes in the mass of snow and glaciers may provide an indication of climate change and the rate at which global warming is taking place; and the rate at which the cryosphere (the frozen parts of the Earth's surface, including the polar ice caps, continental ice sheets, glaciers, sea ice, and permafrost) is responding.

The extent and future development of the network will depend on organisations that can see the benefits, want to contribute to the development, and define the outcomes that will help shape the network.

NIWA is grateful to the landowners, especially the NZ Department of Conservation, who allowed us to install these stations on their land. 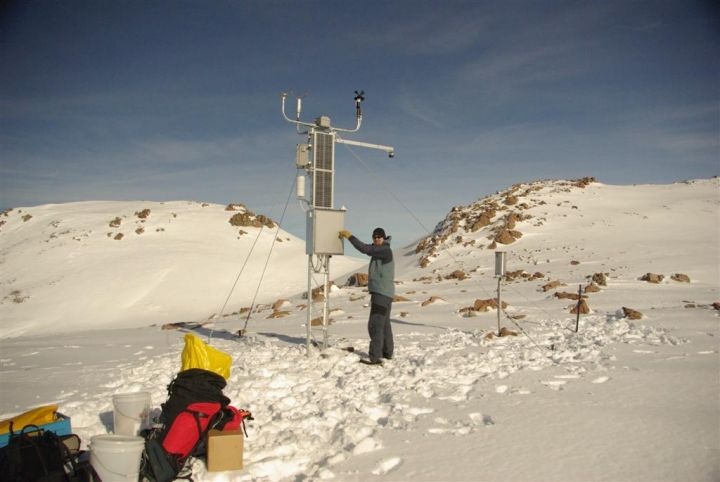 The snow and ice monitoring station on the Murchison Mountains in summer. The snow pillow is to the left of the mast, and the snow-depth sensor is above it. (Shane Rodwell) 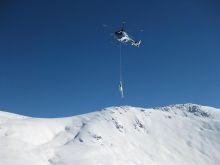