How fast does water enter the Pukaki Canal?

NIWA has successfully measured the flow rates of water being discharged from Lake Pukaki into the Pukaki Canal which carries water to the Ohau, Benmore, and Waitaki power stations.

MEL’s main aim is to ensure safe operation at the canal inlet, and to minimise the risk of damage to inlet structures due to high and unequal flows through the gates. MEL needed detailed velocity measurements to assess how the water interacts with the canal inlet. These measurements will enable better assessment of high-flow or unbalanced-flow risks.

With better information, the current constraints on when/how the gates are operated asymmetrically could be relaxed, simplifying maintenance and compliance with the Dam Safety Assurance Programme.

Measuring high water velocities in an extremely turbulent environment, with lots of surface waves and air entrainment, is difficult and potentially dangerous.

So how do you measure them?

We considered several technologies including Acoustic Doppler Current Profiling instruments. We  decided there would be too much turbulence, too many air bubbles in the water, and there would be many physical deployment problems.

So we chose the only other known option, a NIWA-designed POEM flood-gauging flow meter.

The POEM (Pressure Operated Electronic Meter) can continuously measure water velocity and depth. It can also produce vertical velocity profiles from the canal water surface to the bottom, and back, at points across the canal.

Find out more about the POEM

POEM was designed specifically to gauge flows under flood conditions. In its standard configuration the POEM can be used to measure water velocities up to 10 metres per second (m/s) at depths of up to 10 metres.

It measures and records depth and velocity simultaneously and can provide useful information about turbulence.

POEM has no moving parts and little hydrodynamic drag. Because it measures depth directly, measurements are independent of any vertical angle in the suspension cable.

To measure water velocity, POEM is based on Pitot technology. Water flow velocity is converted to pressure which is measured electronically via a pressure sensor. We calibrate and check POEMs at speeds up to 10 m/s in a rating tank (where they are towed through still water over a range of accurately known velocities).

To measure depth, POEM uses a pressure sensor. A calibration relationship converts the static pressure, from the weight of the water above it, to depth.

The measurement location had no installed monitoring facilities. We designed a temporary cableway across the canal at the inlet, anchored at each end by a heavy vehicle.

We used a remote controlled profiling winch assembly that allowed the POEM to be lowered and raised through the water column. The winch was fitted to the temporary cableway and the POEM suspended from it.

The suspended POEM was manually traversed across the canal, stopping at several defined points, measuring the vertical velocity profile, against measured depth, as it was lowered and raised at each point.

A wireless data link allowed the winch to be controlled and transmitted POEM’s data to the data recording equipment located beside the canal.

Watch a video of the POEM's deployment

Although a highly novel and unique activity, the data collection exercise has proved successful and has captured large numbers of data for analysis. Once the data have bee pre-processed they will be analysed by the primary consultants for the MEL project.

NIWA was subcontracted to Damwatch NZ Ltd for this project. Other companies in the team were Opus Consulting and DownerEdi. 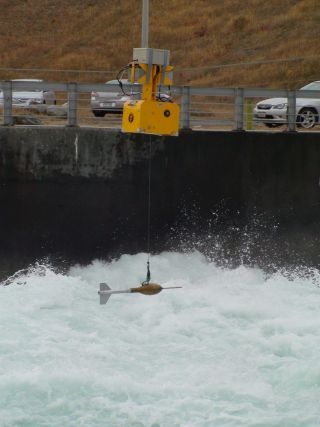 Water velocity as measured by the POEM as it travels down (red data), and then back up (blue data) through the water. How fast does water enter the Pukaki Canal?