Help us build a better niwa.co.nz for you by filling out our annual survey
10 February 2010

One of the Instrument Systems team’s more complex projects recently was to help create an experimental system which accurately acidifies and measures the pH of seawater in simulated Antarctic conditions. NIWA scientists can now research how ocean acidification is likely to affect Antarctic shellfish.

The concentration of carbon dioxide (CO2) in the atmosphere is increasing; as a result our oceans are becoming more acidic as more CO2 dissolves in seawater. Marine animals with calcareous shells are one group likely to be affected, and this research aims to find out exactly what the effects will be.

With help from the University of Otago, NIWA staff from Greta Point and Mahanga Bay (Wellington), and Instrument Systems, collaborated to create an experimental system to accurately acidify and measure the pH of seawater flowing through aquaria containing Antarctic shellfish.

Accurate adjustment and monitoring of pH – a major challenge

The instrumentation was a major challenge. Acidified seawater had to be produced and the pH of the water measured to an accuracy of about +/- 0.005pH … and ideally it had to be carried out at Scott Base in the Antarctic.

After assessing possible risks of operating a complex prototype system in such a remote environment, we decided to build an Antarctic marine laboratory closer to home.

The laboratory – a home away from home

We built the new laboratory using an existing room at NIWA’s Mahanga Bay Aquaculture Research Centre, Wellington Harbour. In this we simulated Antarctica’s low seawater temperature and conditioned the pH of the abstracted local seawater to match that of Antarctic seawater.

Instrumentation in the laboratory carries out two independent processes; acidification and sampling.

The laboratory has several mixing tanks, and smaller aquaria that house the shellfish.

The cooled seawater flows into mixing tanks. Here CO2 is added to bring the water in each to the required pH. Each tank has a separate CO2 mixing and metering system to produce varying pH treatments.

Water flows continuously through the tanks and aquaria and is then returned to Wellington Harbour after sterilisation and restoration to its original temperature in a purpose-built heat recovery system.

Water samples are automatically and sequentially drawn from each tank, pumped to a regulated heater, warmed to 5 oC and read in the spectroscope.

A background reading is taken, followed by one where seawater is first mixed with a pH indicator dye in a syringe pump. The spectral reading, from the product of the seawater/dye reaction, is sent to the computer to calculate an accurate pH value.

The computer controls the whole process, and monitors and stores pH, temperature, and other data. It processes this into useful information and displays the system’s progress and diagnostic information.

An ethernet connection provides real-time access to all system information, and allows some remote control of the system, via the NIWA intranet.

The system isn’t restricted to just studying shellfish from the Antarctic. Plans to investigate the impact of ocean acidification on NZ species are already underway with many other applications possible.

The development of the Antarctic facility and pH dosing/measurement systems have been funded by CAPEX. The Antarctic experiments are being conducted as part of NIWA's FRST International Polar Year project, IceCube.

Find out more about IceCube

Effects of ocean acidification on plankton in New Zealand waters 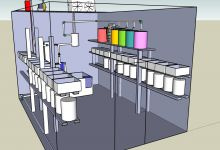 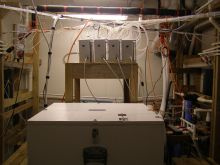 Inside the Antarctic-simulation lab – at rear, samples are drawn through tubes, and ported through four 8-way distribution valves. In the box in the foreground, the samples are sequentially analysed in a spectrometer and data sent to the computer. (Vonda Cummings) 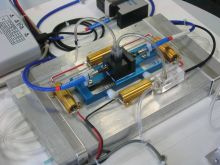 Inside the box in the foreground - the water samples are temperature-controlled and then spectrometrically analysed. (Jeremy Bulleid)
Research subject: Climate changeHydrologyInstrumentationRiversWater Quality