Help us build a better niwa.co.nz for you by filling out our annual survey
10 February 2010

For over two decades NIWA has installed automatic monitoring systems in hostile environments, and probably none is more hostile than the Antarctic. In 2009 we were involved in a project with a difference - installing a climate station as part of a project to protect Scott's Hut, Cape Evans.

NIWA has a long association with monitoring the Antarctica climate:

In January 2009 we installed a portable climate station near Scott’s Hut at Cape Evans, as part of an Antarctic Heritage Trust restoration project. Scott’s Hut was established during the Terra Nova Expedition of 1910–13 and used as a base during Scott’s unsuccessful attempt to reach the South Pole.

The solar-powered station will provide the Trust with information that will deepen its understanding of the severity of the conditions the building will have to endure. It should give valuable insight into how effective its restoration methods are.

NIWA installed and manages Antarctica New Zealand’s permanent sea-level monitoring station at Scott Base. The station is sited at the point where water is extracted for conversion to drinking water.

A nitrogen gas bubbler line was inserted through the existing hole in the ice at the drinking water intake and fixed to seabed rock to provide a sea-level datum that, unlike ice, doesn’t move. A precision pressure sensor was installed in the nearby de-salination hut and a data-logging system in one of the main huts. The gas in the gas line couples the water pressure to the sensor;  the data logger converts this information to a sea level reading and records it.

The station has now been successfully recording sea-level data at Scott Base for nearly a decade. Unusually, Antarctica has only one tide per day.

Green power by next winter

In 2007, NIWA supplied Meridian Energy Ltd (MEL) with a 30-metre-high tower with wind monitoring equipment to help them assess wind power generation in the Antarctic.

MEL recently announced that it was trialling three wind turbines on the hill behind Scott Base. By next winter the most southern wind farm in the world will completely power both Scott Base and McMurdo Station, reducing atmospheric CO2 emissions by around 1200 tonnes annually. 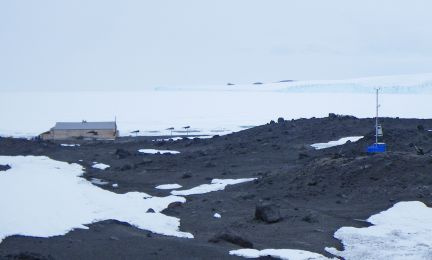 NIWA’s climate station in the right foreground, Scott’s Hut in the background.(Shane Rodwell) 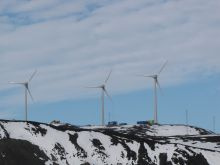 Monitoring the sea level and extracting water for de-salination at Scott Base. A pump in the green shed draws water from the sea below (Evan Baddock)
Research subject: Climate changeHydrologyInstrumentationOceansRiversWater Quality