NIWA is assisting an international research team to carry out an intensive flood dynamics study on a four-kilometre reach of the Rees River, a large braided river that flows into Lake Wakatipu at Glenorchy. ‘Project Reesscan’ aims to enhance models of river-channel change and gravel transport during floods, enabling the consequences of these natural processes to be managed more effectively.

The research team is led by Aberystwyth University (Wales) and includes the Forest Technology Centre of Catalunya (Spain). Instrument Systems has supplied flow-monitoring equipment, including flow-to-web technology and automatic water sampling. NIWA’s Alexandra field team installed this equipment at two monitoring stations, one upstream and another downstream of the study area.

What to measure during a flood

Floods can cause a number of changes to rivers. They can:

The research is determining what flows into the study area, what flows out, and what changes inside the study area as a consequence. Researchers want to know how much water is flowing, how fast, how much sediment it’s carrying, and how the morphology is changing as a result.

Continuous monitoring at each end of the study reach measures a range of parameters. The data is sent via satellite to the NIWA Neon data-communications server, making near-real-time data accessible through an internet browser.

‘Rees at Invincible’ is strategically located where the river forms a straight single channel, to facilitate stable measurements. It defines the inflow to the study area.

Data capture at ‘Rees at Invincible’

Water level:  Measured with a PumpPro air bubbler, a robust instrument ideal for carrying out measurements in a flooded debris-laden river. A ‘sideways-looking’ Acoustic Doppler Current Profiler (ADCP) has also been installed, beside the bubbler gas line. This provides a secondary water level measurement.

Suspended sediment concentration: A water sampler triggers on a flood precursor and automatically fills bottles with water samples during the flood. These samples are analysed in the lab and may be used to calibrate continuous turbidity measurements. Additionally, when heavy rainfall is predicted, the team is on stand-by, ready to capture the resulting flood. Neon near-real-time data indicates the start of the flood, when the water level at the upstream station begins to rise. Team members then manually sample the flood waters using a sediment sampler suspended from a cable strung across the river.

Turbidity: A turbidity sensor/data logger gives an independent and continuous indication of the concentration of suspended sediment in the water.

Water velocity: The ADCP measures water speed in three dimensions and is used to derive flow. This provides valuable information, not only on the prevailing downstream flow, but also on the hydraulic forces causing lifting and cross-channel movement.

Bedload transport rates: The boat-mounted ADCP logs the difference between its GPS location and bottom tracking location. This provides information about how fast the river bed is moving.

This is located at the Paradise Road Bridge, four kilometres downstream, where the river splits into two channels. This is the outflow of the study reach.

Water level: Two microwave radar water-level sensors are located on the bridge, looking down at the river surface. The levels from the radars are used to study how floods are routing from the upstream to the downstream monitoring station.

Other measurements are carried out between the monitoring stations.

River bed topography: The entire floodplain of the study reach is surveyed after each significant flood. Topographic surveys are carried out using a Terrestrial Laser Scanning system (TLS, terrestrial LiDAR). A rugged mobile scanning system (ArgoScan) has been developed working with the Intelligent Robotics Team at Aberyswyth University. ArgoScan can acquire up to 1 000 000 000 survey points per day at millimetre precision so we are creating very high resolution 3D models of the Rees River as it changes its form through the summer flood season. We can survey the entire study reach in less than one week using the TLS.

Aerial photos: Detailed aerial surveys of the study area are made after each flood.

Stone movement: To determine the movement of stones during a flood, the team painted and implanted 400 stones with Radio Frequency Identification (RFID) tags so that they could be located after a flood.

Bed material: Bed material samples are obtained to record the distribution of particle sizes at different locations throughout the floodplain.

Continuous visual record: Every five minutes, two live time-lapse cameras record the water level against the staff gauges at the upstream and downstream sites. They also record inundation patterns; how the channel ‘wets up’ as the level rises; and provide a visual indication of suspended sediment load. The visual records are synchronised with water-level recordings.

Several significant floods have occurred since the on-site component of Project Reesscan began in November 2009. The frequency of floods is significant, as the project can be completed in a relatively short time, compared with carrying out the same study on a river that seldom floods. 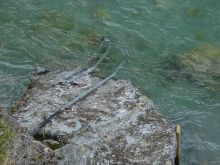 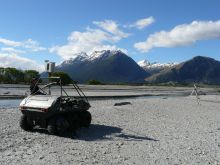