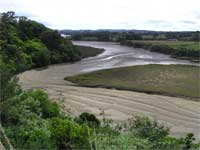 Tidal creeks that fringe many of our estuaries play an important role in trapping eroded catchment sediment. This is an unexpected finding of a three-year study in the Mangemangeroa Creek, one of many that connect catchments to the Hauraki Gulf. Fine silt runoff is a major issue in New Zealand estuaries, causing turbidity and sedimentation, and threatening some plants and animals.

A combination of tidal return flows and low settling speed of fine sediment are what matters most to the sediment’s fate after it is delivered by storms to tidal creeks andestuaries. The timing of storms in relation to tides proved less important than expected.

If a storm occurs at low tide, silt-laden stormwater is carried down the creek’s channel and discharged directly into the estuary. At high tide, the stormwater floats on the denser seawater, and a surface plume forms. Suspended silt particles are carried out of the estuary on the ebb tide. In both cases, fine silt is kept in suspension by tidal currents, and much of it is returned to the tidal creek on the following 2–3 tides, anddeposited there.

“By trapping sediment in this way, tidal creeks take some of the pressure off estuaries,” says NIWA’s Andrew Swales.“You would think the creeks might run out of room for more sediment, but rising sea level – currently 1.4 mm/year around Auckland – is offsetting the build-up, which averages 2–4 mm a year in Auckland estuaries.”

The research was funded by the Foundation for Research, Science & Technology and the Auckland Regional Council.