Help us build a better niwa.co.nz for you by filling out our annual survey
15 November 2007 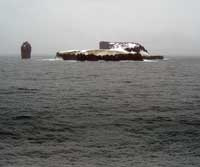 The seas of Antarctica are amongst the most inhospitable in the world, so it is not too surprising that historically their mapping has left a lot to be desired.

That is changing, however, as NIWA’s research vessel Tangaroa carries scientists to Antarctica to survey islands and map the seabed. After three trips, one outcome has been a number of changes to nautical charts.

Voyage leader, NIWA’s John Mitchell, says it was no real surprise to find that Scott Island was in the wrong place. “Every island we have surveyed during previous voyages to the Antarctic has been significantly out of position – at times by up to 5 or 6 kilometres,” says John. “For much of the year the area is shrouded in snow and fog, so it is important for all shipping that we get the positions right.”

The work was commissioned by Land Information New Zealand.