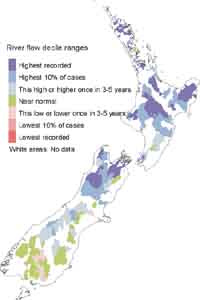 Sequence of calculations to model health risks at a beach, either from swimming or from consumption of raw shellfish.

One of the direct consequences of land-based activities on the coast is the discharge of treated sewage into the sea. Pathogens (bacteria, protozoa, and viruses) in sewage can pose a risk to human health, through people swimming in polluted areas or eating contaminated shellfish. Treated sewage has to be disposed of somewhere, and local authorities face the problem of quantifying the risks to human health associated with discharges of different pollutants in different places and at different times.

NIWA and ESR (Institute of Environmental Science & Research) scientists have combined forces to develop models which help quantify and rank the risks of polluted discharges. These models incorporate variables such as the type of pathogen and its concentration levels, and human factors such as swim duration, quantities of shellfish consumed, and dose-response relationships – that is, how much of the pathogen needs to be ingested before people become ill.

The work has proved successful and of value to a number of agencies. One outcome was a revised plan by Christchurch City Council concerning its current discharge of treated effluent into the Avon-Heathcote Estuary. An ocean outfall, which will substantially reduce health risks, is now proposed.

Another exciting outcome reported by NIWA scientist Graham McBride is that an expanded team including NIWA, Massey University, NZ Food Safety Authority, and Ministry for the Environment, has recently been commissioned to start work on modelling enteric zoonotic disease risks. These are animal-borne diseases (such as giardiasis, cryptosporidiosis, and campylobacteriosis) that can be passed through water to humans.