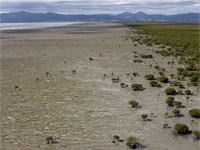 Many of New Zealand’s estuaries are becoming muddier, as sediment washes into them from rivers and stormwater drains and accumulates, rather than being dispersed by tides. Mangrove swamps are a feature of some of our muddy estuaries, and the Firth of Thames is a good example of a place where mangroves and mud are steadily accumulating. NIWA scientists are working with Environment Waikato to understand why and how sedimentation is occurring in the Firth of Thames, and how sedimentation and mangroves interact.

Sediment build-up over time can be determined by taking sample sediment cores and then dating radioactive isotopes within different layers of the sediment. Radioisotopes provide an accurate dateline of when different layers of sediment were buried in the estuary. This helps build a picture, both historically and in the recent past, of how and when sedimentation has occurred.

The evidence from the Firth of Thames shows that significant sedimentation was triggered by European settlers clearing forests in the catchment for building and farmland. This continued well into the mid 1900s. Although mangroves were noted by Captain Cook in 1769, they did not spread widely until the 1950s. Now, the mangroves encourage further sedimentation, because they capture and retain sediment, and new mangrove seedlings are progressively expanding the seaward edge of the swamp.