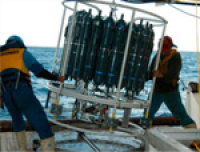 A NIWA-led study has shed light on the role of iron in controlling plankton productivity, and points to dust as a source of this important element in the New Zealand EEZ.

Iron is essential to life in the oceans, where it’s used by microscopic plants (phytoplankton) living in the surface layer to convert sunlight to energy. This process supports the ocean food chain, including fisheries, and can influence climate through exchange of carbon dioxide and other trace gases.

NIWA led an international scientific voyage to investigate the sources, sinks, and recycling of iron in subantarctic waters south of the Chatham Rise. Results confirmed that, despite being present at vanishingly low levels, iron controls productivity in subantarctic waters by limiting phytoplankton growth. This applies to at least 30% of New Zealand’s EEZ.

‘We found that the organisms living in these waters are able to make the most of what little iron there is by recycling it very quickly,’ says NIWA biogeochemist Dr Cliff Law.

The study also suggested that Australian dust may be a significant source of iron for New Zealand’s subantarctic waters. NIWA is investigating this further by deploying dust-collectors on commercial vessels that follow regular routes around New Zealand.