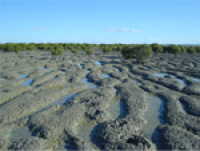 Mangroves have colonised some 600 hectares along the 9 km of coast between the Waitakaruru and Piako River mouths in the southern Firth of Thames.

Mangroves have been spreading across the intertidal flats in the southern Firth of Thames at a rate averaging about 20 m per year during the last 50 years, causing large-scale environmental changes. With collaborators from the University of Queensland and Louisiana State University, we are investigating the relationships between sedimentation and this rapid mangrove spread.

We are using radioisotopes in sediment cores taken from the mangrove habitat and intertidal flat to measure rates of sediment accumulation and cycling over the past 50 years or so. Results show that sediments are accumulating on the intertidal flats at a much higher rate (25 mm per year) than in many east coast Auckland estuaries (2–4 mm per year). Furthermore, sedimentation rates in the Firth of Thames mangrove habitat are much higher, averaging 50–100 mm per year. "This is probably occurring because the Firth holds a large reservoir of mud, which is periodically re-suspended by waves and transported into the mangrove habitat by currents," says NIWA coastal sedimentologist Andrew Swales. The mangroves then retain this fine sediment, thereby creating their own habitat.

But it’s puzzling that mangroves have spread so rapidly in the last 50 years, when the main pulse of catchment sediment runoff occurred during deforestation 100 years ago. The team is attempting to solve the puzzle by relating sedimentation rates to the historical distribution of mangroves (determined from aerial photographs) and mangrove growth rates.

The work is funded by Environment Waikato and the Foundation for Research, Science & Technology.