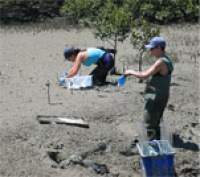 Sediments in some of our urban estuaries have become contaminated with stormwater-derived heavy metals (such as zinc, copper, and lead) and polycyclic aromatic hydrocarbons.

The Auckland Regional Council has recently developed sediment quality guidelines for the Auckland region based on the concentrations of contaminants that are toxic to estuarine organisms. "NIWA scientists are helping to refine the guidelines for local conditions by testing the toxicity of Waitemata Harbour sediments to aquatic life", says NIWA toxicologist Sue Clearwater.

In our preliminary tests, we detected slight, but not statistically significant, decreases in survival of the large introduced amphipods. The results were confounded, however, by unexpected growth of resident juvenile amphipods. We also showed that amphipods from the slightly contaminated Rangitopuni site are adapted to zinc exposure. All of this suggests, but does not prove, that some toxicity due to sediment contaminants might be occurring in the Whau. We will repeat these tests in May using amphipods from a more pristine site.

This research complements our Urban Stormwater Contaminants Model, which predicts where stormwater contaminants are likely to accumulate.