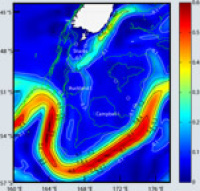 The Ministry of Economic Development is about to put more petroleum exploration permit blocks in the Great South Basin up for offer. In preparation for the offer, the ministry contracted NIWA to produce detailed information on the marine weather and sea conditions of the region.

Gas has already been discovered in the Great South Basin, and two blocks are currently held by the Bounty Oil and Magellan companies. There is, however, some concern that the industry could regard the Southern Ocean as too risky. NIWA’s work reduces that perceived risk by providing companies with substantial analysis of the likely sea conditions and the best time of year for ship operations. We have used measurements, such as wave buoy and ship observations, and computer models, including our 20-year wave hindcast.

The data from our work suggest that for a vessel able to operate in significant wave heights up to 4 metres and winds up to 25 metres per second, annual mean downtimes could range from 30% at the most energetic southern site to 10% in inshore areas near Stewart Island and east of New Zealand, to 2.5% at inshore Otago.