The September '09 tsunami in Wallis & Futuna

Help us build a better niwa.co.nz for you by filling out our annual survey
9 November 2009

NIWA scientists are part of a team aiming to assess the tsunami risk in the French Territory of Wallis & Futuna. By coincidence, the team was on Futuna a week after the 29 September 2009 Tongan earthquake and tsunami and were able to view the damage first-hand.

The tiny islands of Futuna and neighbouring Alofi are located approximately 400 km northeast of Fiji and 600 km west of Samoa, on the North-Fiji transform fault zone, one of the most tectonically active fault zones in the world.

The MW 8.1 earthquake occurred at 1745UT, and the tsunami hit the Samoan islands 15–20 minutes later.  The tsunami reached Futuna and Alofi around one hour later. Local time was around 7.00 am on 30 September.

Waves over two metres but no casualties

The research team estimated that waves up to 2.2 m reached Alofi Island. Two women were caught by the waves on the eastern tip of Futuna but managed to hold on to rocks; a few pigs were apparently swept out to sea. Luckily there were no serious human casualties. Tsunami debris on a track in Alofi. (Geoffroy Lamarche)

The damage caused by the tsunami on Futuna and Alofi was nowhere as dramatic as in Samoa, American Samoa, and Tonga. Overall, the population was extremely lucky as it was early and low tide when the tsunami hit Futuna and Alofi. Had it been high tide and the middle of the day when people access the reef for fishing, the consequences could have been much worse.

Recent events and oral tradition indicate that tsunami hazard is indeed a reality for the 4000 inhabitants of Futuna, who mostly live on a coastal strip between a narrow reef and the coastal cliffs. Oral traditions speak of deadly events which have devastated the coast and which may well be tsunamis.

The last known tsunami is that associated with the 12 March 1993 MW 6.4 earthquake which resulted in 1–2 m high waves in the bay off Léava. During our visit, we visited 45 sites around the islands of Futuna and Alofi, and measured the associated run-up and inundation. We also interviewed many local people. The maximum run-up we measured was 4.5 m on Alofi Island and at eastern end of Futuna Island. Other areas with a history of tsunami include the Bay of Leava, the ‘capital’ of the island, and in Tavai at the northwest end, where local legends report paleo-historical events. 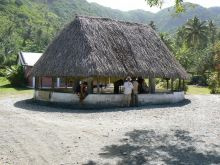 This project was funded by the Pacific Fund of the French Ministry of Foreign Affairs through the French Embassy in Wellington. The scientific party on Futuna consisted of Geoffroy Lamarche (NIWA), Bernard Pelletier (IRD, Nouméa), and James Goff (University New South Wales). 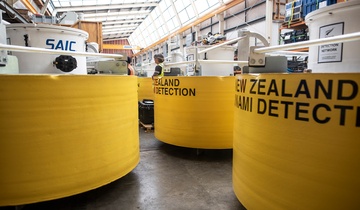 The September '09 tsunami in Wallis & Futuna