NIWA receives and analyses all NOAA satellite transmissions (called passes) visible from NIWA’s reception station at Greta Point, Wellington. These satellites provide regular data coverage (up to 8 times daily for any particular location) over a large area. Each weekday starting around 10:00 NZLT, the SST data retrieved from the most recent passes are temporally composited (to remove cloud) and an SST analysis generated for our standard coverage region at 1 km spatial resolution.

Two different temporal compositing periods are used. On Tuesday and Friday, a four-day time window is employed, while on the other days a three-day period is used. Despite this compositing approach, long spells of inclement weather may still leave some regions affected by cloud. SSTs cannot be estimated for such areas. Accordingly, there will be fuller data coverage on Tuesdays and Fridays.

The SST data is only updated during the week days, Monday to Friday excluding national and local public holidays  (mainly Wellington).

No update is available during the holiday break between Christmas and the New Year (25 December to 2 January inclusive).

Normally, updated data will be on the web site at about half past noon.

The composited data are mapped onto smaller areas around the New Zealand landmass, and uploaded to the web (usually by noon) for use by fishers.

These areas are suitable for fishers who may be working far from shore.

These areas are suitable for near-shore fisheries.

All SST analyses include two types of data: the composited SST shown as a colour image, and an isotherm analysis of that SST image. The latter is especially powerful for identifying areas of the sea surface where the temperature is the same or similar, and for identifying temperature breaks – these occur where the isotherms bunch together. 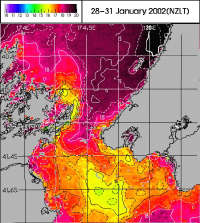 This example analysis is for the Brett area (click to enlarge) and shows these features:

This image shows a sample analysis for the Cook area (one of the recreational areas). As noted above the colours used to represent the SSTs in both this image and the previous one are the same, but the values of SST that they represent differ, as can be seen from looking at the scales in the top left of each image.

The fundamental spatial resolution of the SST data for both the commercial and recreational areas is the same, 1 km – but the image pixels in the recreational areas are enlarged so that the SST features present are easier to see.

The SSTs represented by these data have been independently validated through comparision with in-situ buoy data. Under normal conditions, the composited SSTs have an accuracy of approximately ±0.2°C. There are two situations, however, under which this may not be true:

SSTs very close to the coast may also be in error, due to the strong mixing processes that occur there (by tides, for example) and minor land contamination of the raw satellite data.