We are now into the second week of the Ross Sea Environment and Ecosystem Voyage 2019 on RV Tangaroa. Nobody is in any doubt that we are in the Antarctic now. In fact, as I write this, I am looking out the window and can see the steep cliffs and ice of Cape Adare on the horizon.

As we passed 70 degrees south and approached the continent yesterday morning, sightings of wildlife increased. First were Antarctic and snow petrels, then groups of penguins, and minke whales. Rob Stewart, who is logging the whale sightings onboard as part of the cetacean work we are doing with the University of Auckland, had his work cut out as whales were being reported right and left of him by the excited gathering on the bridge!

A glimpse of the Antarctic continent on the horizon. [Photo: Ben Lennard, NIWA] Our main reason for coming to Cape Adare was to retrieve and re-deploy scientific moorings. During the 2018 Tangaroa voyage seven moorings were left down here, each equipped with instruments that have been busy recording over the past 11 months. Moorings allow us to make observations at fixed locations over a long time period—including during winter when the sea is covered with ice. Data from all the moorings will form the basis of long-term time series to monitor the Ross Sea environment. We have three different types of moorings. Passive acoustic moorings (PAM) are “whale listening posts”. These are hydrophones that make recordings of calls of whales that let us know when they are in the vicinity. This tells us what species are passing through and at what times of year. We have 3 PAM locations and have visited two so far: on the Pacific-Antarctic Ridge; and at Scott Seamount. The Pacific-Antarctic mooring was successfully recovered, but unfortunately the Scott mooring did not release on command and is still in location. We may make another attempt to recover it on the way home. New moorings have been put in both sites with instruments from NIWA and the Australian Antarctic Division. We will (hopefully) retrieve the final PAM next week on Iselin Bank. The other four moorings are all near Cape Adare. Three of these are oceanographic moorings—in collaboration with Melissa Bowen at the University of Auckland. Processes in the oceans surrounding Antarctica influence climate, future sea level rise, and regulation of the carbon cycle, but our understanding is limited by a lack of observations. The outflow of extremely cold, dense, water from the Ross Sea as Antarctic Bottom Water (AABW) has a major influence on the deep water properties of the global ocean. The three fixed hydrographic moorings in the Cape Adare region will measure the outflow of AABW from the Ross Sea continental shelf. Data from these instruments will allow us to investigate the mechanisms by which water exits the shelf, and to assess changes in the Ross Sea outflow properties over the past decade. I am pleased to report that the three 2018 moorings have all been successfully recovered in the past 24 hours and data are being downloaded as I write. All three moorings will be re-deployed over the next two days.

The seventh mooring is definitely a lucky one. This is an upward looking ASL echosounder that is mounted on the seabed looking upwards to measure fish and krill in the upper 300 metres. This particular instrument has just spent its second winter in Antarctica. Its first stint was in Terra Nova Bay in 2015 to 2016, when we used it to record migration of silverfish (work just published in the journal Antarctic Science). This time its mission has been to estimate availability of food for Adelie penguins in the vicinity of the Cape Adare colonies. I say it is lucky because when we arrived yesterday the mooring location was completely covered by sea-ice. However when we went for a look late last night a small ‘puddle’ of open water had appeared right over a mooring site—the instrument and its data was quickly sent to the surface and recovered by a happy crew and grateful scientists!! As well as the moorings operations and wildlife observations, a daily routine of data collection has been maintained by our international team. Hundreds of litres of water have already been filtered and samples collected. A big component of the voyage is focused on some of the tiniest organisms in the ocean—the phytoplankton and bacteria—and I’ll write more about that in my next update. Everybody has got into the routine of shipboard life, sea-sickness on the voyage south has been forgotten as we have been treated to a spell of relatively calm weather, and meals are eagerly anticipated! With three shifts (midnight to midday, midday to midnight, and 8 am to 8 pm) we are operating 24 hours to maximise the opportunities to collect data. After deploying the moorings we will leave Cape Adare on Monday and head east towards Iselin Bank, where our research for the next two weeks will focus on the seabed in depths from 600-1500 m to assess abundance of fish and invertebrates inside and outside the Marine Protected Area. 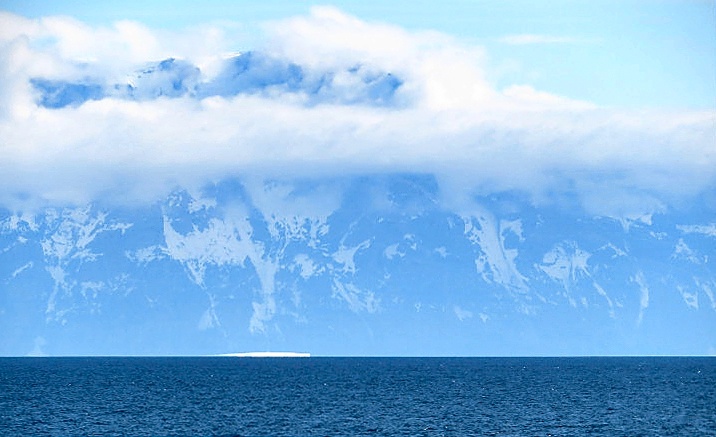 The view from my window 18 Jan. [Photo: Richard O’Driscoll, NIWA]