Bunny hopping on the Southern Seas

Despite winds gusting to 50 knots and breaking waves reaching 6 m, and under conditions which seasoned 1st mate Alexander Morrice described from the bridge as “fierce to ferocious, becoming fantastic at times”, the Easter Bunny still managed to sneak in under the radar and visited the RV Tangaroa overnight. Little parcels of chocolate eggs were found taped outside everyone’s cabin doors. Few clues to the identity of the bunny have been found, but Bryan the Teddy Bear is a strong suspect.

We have arrived at the Southern Biophysical Mooring site (46° 38’S 178° 33’E), but due to rough seas we’re unable to do our planned recovery and redeployment of the instruments. We just have to ride it out today and try tomorrow.

However many of our underway systems are still quietly measuring physical and chemical quantities from the world outside our ship. In particular, John McGregor is operating the wave radar system in some of the roughest sea conditions observed so far this cruise, and the data should provide some interesting results. Many biologists are brewing up their bottle incubations growing plankton, zooplankton and bacteria. Biologists Jill Peloquin and Karl Safi bravely sample from their tanks at the stern of the ship high up on the fantail. Today the motion has been so violent some of their sample bottles have been thrown out of the tanks. And chemist Lori Ziolkowski from the photochemistry group has her own little high concentration iron catalyst experiment cooking away, exploring the efficiency of carbon monoxide production from colour dissolved organic matter.

After our long 22-hour steam from our fertilised patch to this mooring site, our fresh water tanks are nearly full. Because of slow running in the patch we were only producing 5–6 tonnes per day but the 43 people on board (plus laboratories) were using 7 tonnes per day. The four freshwater tanks of the ship have a storage capacity of 70 tonnes. On this ship, fresh water is made in evaporators that use waste heat from the ship’s engine. This engine runs at constant speed, driving the main 1.5 megawatt power generator and a single variable pitch propeller. The ship’s speed, forward and reverse, is controlled by adjusting the pitch of the propeller blades. Whilst explaining the complex workings of the engine room to us, Fred de Jager showed us some interesting statistics: 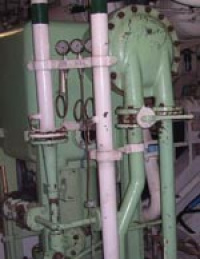 The freshwater evaporators which supply our fresh water. 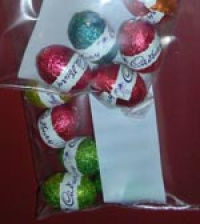 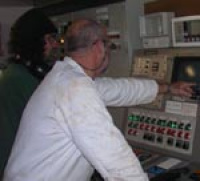 Fred and Andrew in the engine control room.