Scrutiny on the Bounty Trough

Careful what you wish for; you might just get it. We’ve had the extreme winds that gave us the high gas exchange we’d hoped for, putting folk on their backs, instruments on the deck and the ship hove to for a day. Then high mixing and rapid spreading, resulting in a highly mobile patch that led us a merry dance around an eddy. Now we need the biology to play ball.

Things here are looking positive, with the biological indicators moving in the right direction following the 4th iron addition two nights ago. In the accomplished hands of Big Bad Bill Main, the infusions of 4 tonnes of tracer-laden seawater and 8 tonnes of iron solution have run like clockwork. The plankton can’t be iron-deplete now. Neither can their tardiness be put down to dilution, as the patch has sat comfortably in a back-water to the north of the eddy for the last few days, barely moving or spreading. So what’s holding them back? Is it deep mixing, zooplankton grazing or lack of a Factor-X that shows promise in the deckboard incubations? All will hopefully be revealed over the remaining few days. Whatever, we clearly have an experiment that bucks the general trend in that adding iron doesn’t necessarily stimulate a phytoplankton bloom.

The improved behaviour of the patch over the last couple of days has unleashed a plethora of off-vessel activities, with an array of hardware released from the inflatable Naiad around Tangaroa. There’s also been a surge in volunteers for these activities, coinciding with a spell of reasonably fine weather. With drifter buoys, gas buoys, profilers, spar buoys and chambers floating about us, the navigation and map plots are lit up like xmas trees, and the local birdlife has never been kept so busy.

Meanwhile down in the Tangaroa’s fish factory, the powerhouse of the experiment, the tracer team, keep things ticking over. The tracer patch is basically a large test-tube, that has allowed us to alter conditions within (by adding the iron), and then compare the response with the unaltered waters outside. Monitoring the spreading, movement and location of this patch is critical to the experiment. Full marks to the officers: Roger, Alex and Yoshi on the bridge, and the tracer team who’ve kept tabs on one of the most dynamic tracer patches to date for 14 days now. This is a round-the-clock activity with patch mapping overnight by Ed Abraham and Cliff Law, and vertical profiling by Peter Hill and David Ho during the day, with additional support for the release from Andrew Marriner and Big Bill. The fish factory provides a “cosy” environment below decks where the scientists are probably more light-limited than the phytoplankton, with just Ed’s banjo and Cliff’s whistling to keep themselves entertained. Did Fletcher Christian really have it that bad? 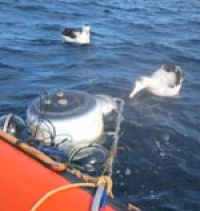 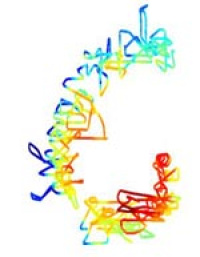 The evolution of the tracer patch round the eddy, as shown by the ship’s track overlain on sea surface temperature. 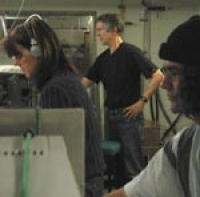 Frenzied activity down in the Fish Factory. 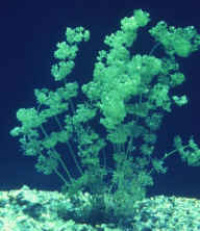