As was previously mentioned, we took another stab at trying to buff up the phytoplankton by, as Peter Minnet so eloquently put it, "pumping iron" into the patch yesterday. We are now waiting to see if the phytoplankton respond to this.

I am involved in the atmospheric chemistry group (along with Mike Harvey, Jill Cainey, and Murray Smith), specifically looking at aerosol chemistry. My primary instrument is a Berner impactor, which samples atmospheric particulate matter by pumping air through an inlet on the foremast and then separating the particles into 4 different size categories. I will be doing ion chromatography analysis on the particles when I get back to NIWA to determine the chemical composition of the aerosols in each size bin.

Although much of this science may seem very esoteric, there are definite real-world applications to this study. Specifically, the chemical composition and size distribution of aerosols has important implications for climate change due to their effects on cloud formation.

There has been a hypothesis (the CLAW hypothesis) floating around the scientific community since 1989 that marine phytoplankton can offset global warming. As proposed, higher ocean temperatures due to global warming would enhance phytoplankton growth and hence emissions of dimethylsulfide (DMS) into the atmosphere. This DMS is then readily oxidized to sulfate, which in turn serves as cloud condensation nuclei (CN), increasing cloud cover and solar reflectivity and hence cooling the earth.

However, resent research has shown that a significant amount of these non-sea salt (NSS) particles often coalesce onto larger particles of sea salt which have been flung into the air by breaking waves. This greatly reduces the amount of new particle formation and hence the number of condensation nuclei. If true, this would reduce the efficiency of the cloud cooling effect. By better characterizing the chemistry and size distribution of non-sea salt sulfates, we can help to clarify this phytoplankton feedback. This will allow global climate modelers to adjust their models to reflect the reality of this effect.

Removing samples from the Berner Impactor. 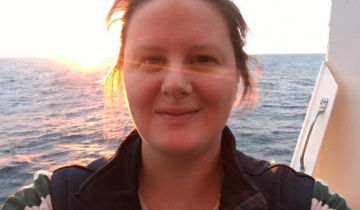