It’s on our radar

After a night of winds reaching 50 knots, the weather settled today, and towards evening we had a short period when there was none discernible. There is still a 2–3 m swell remaining. Today we re-infused the patch with more iron, to maintain the enhanced biological activity.

I spend most of my time looking after the ocean remote-sensing radar. This consists of an antenna, bolted to the starboard railing below the bridge, connected to the signal processing electronics and associated computers in the science area on the bridge. The radar is a sophisticated instrument, one of only a few similar devices in the world.

On this voyage, the purpose of the radar is to measure properties of the ocean surface important in air–sea gas exchange, specifically, the properties of ocean waves and breaking waves. These generate turbulent mixing beneath the water surface. Breaking ocean waves can inject clouds of bubbles into the water, and eject clouds of droplets, in the form of spray, into the air. These processes are of fundamental importance in determining the rate of gas transfer between the atmosphere and the ocean. Data from the radar will be combined with data from the foredeck mast instrumentation and Relaxed Eddy Accumulation (REA) system (Murray, Mike, Jill and Dawn), the subsurface near-surface profilers (Craig and Brian), and Peter’s infrared radiation thermometer to build a greatly improved picture of the physics of air–sea gas exchange. 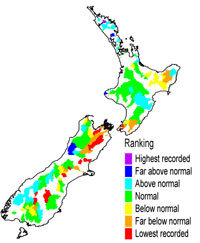 The obligatory sunset shot. All voyages must have at least one of these. In our case at least it proves that we had some fine weather.

Antenna for the ocean remote-sensing radar.

The Tangaroa at night. 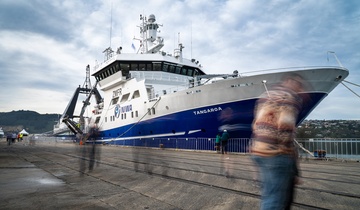