We turn now to the ecology of estuaries: the biota (living things, including fish, shellfish, worms, birds, algae, seagrasses and mangroves), the habitats the biota live in, and the interactions between the two.

Seagrasses are flowering plants that occur around the world. There are about 12 genera and 50 species worldwide, but all the evidence currently available points to there being only one seagrass species in New Zealand, Zostera capricorni, which was recently re-classified as Zostera muelleri. Apart from its common intertidal habitat, Zostera muelleri can also grow as subtidal fringes in New Zealand estuaries if water clarity is high enough. Seagrass beds provide a number of “services”: they stabilise sediments; they provide habitat for a range of other organisms including bivalves and fish; they provide food; they participate in complex geochemical processes that cycle nutrients and gases within sediments and the water column; they act as nursery areas for fish; and they provide grazing areas for waterfowl.

Until quite recently, not a lot was known about the importance of estuarine habitats to fish in New Zealand. Recent research, however, is now filling in the gaps and answering some basic questions, such as what fish species are present, what parts of estuaries fish inhabit and what they do when they are there, and what fish feed on.

An interesting – and very useful – sidebar to this research is the discovery that fish sampling is often best done at night. This is because fish sleep, and while they do they are quite readily collected using dip nights or observed under torch-light and counted! This can provide a way to estimate absolute numbers and size distributions of fish, which is not so easily done with traditional sampling methods. 'Let sleeping fish' lie explains why, and also describes a new research tool, the DUV or “drop underwater video”.

It is now widely accepted that New Zealand’s estuaries do play an important role as nurseries for many fish species (see 'Intertidal flat estuaries: are they useful to fish?'). In the upper North Island, recreationally and commercially valued species include snapper, trevally, kahawai, sand and yellow-belly flounder, grey mullet, rig, and school sharks. Highly abundant forage species include yellow-eyed mullet, anchovies, soles, gobies and triplefins, along with other less well-known species such as ahuru, northern bastard red cod, estuarine and spotted stargazers, and sepia squid.

Some fish species are permanent residents of estuaries, others reside in estuaries only as juveniles, and others migrate in and out of estuaries with the seasons. Factors that strongly influence fish distribution and abundance include sediment type, water clarity, and the presence of “biogenic” habitats (produced by living organisms) such as seagrass meadows, horse mussels, Neptune’s necklace, brown kelps, and mangrove forests. For instance, it is likely that horse mussel beds provide increased invertebrate prey as well as protection from larger fish predators. A similar role is provided by seagrass meadows, which support high abundances of juvenile snapper, trevally, parore, spotties and pipefish. Subtidal seagrass patches seem to be especially important, even those of very limited extent or modest quality.

Estuaries of the west coast of the North Island are thought to be particularly important as nurseries, since they provide shelter from the high waves along the open coast. Larger harbours probably provide the majority of recruits for the coastal snapper stock. For instance, Kaipara Harbour, with 432 km2 of subtidal area, may provide almost three-quarters of all snapper recruits.

There are a couple of unusual things about New Zealand’s mangroves, or manawa.

Firstly, there is only one species of mangrove present (Avicennia marina, the grey mangrove), which is not usually the case in other parts of the world. Secondly, the global southern limit of mangrove occurrence is in New Zealand: Ohiwa Harbour on the east coast and Kawhia Harbour on the west.

Mangroves not only accumulate fine sediments around them, by slowing water currents, but they also help to permanently stabilise those accumulated sediments, by providing habitats for microbes that excrete substances that stick sediments together (see, for example, 'Bugs ‘n’ mud – a sticky problem'). This is well and good, since it helps to reduce turbidity and improve water clarity and quality throughout the estuary. However, it also helps to bring on the natural fate of the estuary: death by infilling with sediments.

At the risk of being overly dramatic, the appearance of mangroves in an estuary that sits within a disturbed catchment is something akin to the arrival of the grim reaper. The question, which is addressed shortly, is whether you deal with the problem by going after the mangroves or by fixing what fuels their spread.

As far as the ecology goes, mangroves contribute to the species and habitat diversity of New Zealand’s estuarine ecosystems. For instance, they are a key source of organic material and nutrients, which go towards fuelling the estuarine food web, and they provide habitat for a wealth of animals, including bacteria, crabs, snails, cockles, worms, black mussels, barnacles, rock oysters, whelks, shrimp, fish and birds.

Life in the soft sediments

There is a world of life intimately associated with the “soft sediments” in estuaries: microbes, plants and animals that live in, burrow through, track across, sit on top of, stick together, eat, excrete in and mix the muds, silts and sands that floor an estuary. Some of these are well-known and obvious – shellfish, for example – and others are less so – for instance, bacteria. Taken as a whole, these assemblages, through the ecosystem services that they provide, are the real engine room of the estuary ecology.

Some species are considered to be “key”, meaning that they have an important effect on the structure and functioning of the ecosystem; were they to disappear, the ecosystem would significantly change ('Determining impacts on marine ecosystems: the concept of key species'). An example of a key species is the bivalve Atrina zelandica, or horse mussel, which tends to occur in patches, with individuals sitting partly buried in the sediment and facing upwards. Horse mussels affect the estuary in a surprising number of ways. For instance, they feed on particulate matter suspended in the water column by pumping water through a mantle, which clears the water of suspended matter; they provide physical shelter and hiding places for other animals who live in close association with patches of horse mussels; their shells provide points of attachment for sponges and soft corals; their excretions help to bind sediments and provide food for smaller organisms; and their very presence can affect the way water flows.

'Burrowing by heart urchins: an important function in soft-sediment ecosystems' describes an equally important but much more secretive and cryptic species common in soft sediments. Echinocardium australe, the heart urchin, is a seldom seen animal that “bioturbates” – or mixes – sediments through its burrowing activities. In so doing, it alters the chemistry of the sediments and associated “pore waters” (water that fills the gaps, or pores, between sediment particles), which has a profound effect on nutrient cycling and the estuarine food web.

It works like this. Sediments are generally rich in particulate organic matter – the remains of plants and animals – that continuously rains down as detritus from above, and which feeds life both directly and indirectly. Directly, animals ingest the detritus. Indirectly, bacteria break down the detritus, which then releases locked-up nutrients, which then fertilise the growth of microscopic plants called algae. These algae are, in turn, at the base of the entire marine food web. The cycle is closed when plants and animals die, the remains rain down on the sediments as detritus, and so on. There is a catch here, and it is this: bacteria need oxygen, and oxygen does not readily diffuse very far into sediments without assistance. That assistance is, in fact, supplied by bioturbators such as the heart urchin, who literally pump oxygen deep into the sediments. In this way, the heart urchin, and other bioturbators like it, is an essential cog in the estuary nutrient-cycling machine. 'Marine soft sediments: more diversity than meets the eye' provides more details.

Sediment bioturbation is one of those things that is both mundane – it’s just a bunch of bugs digging around in the mud, after all – and profound. If you are not convinced, read 'More than just a crab hole', which describes how Helice crassa (the tunneling mud crab) goes about “engineering the ecosystem” by digging holes in the mud.

The burrowing shrimp Callianassa filholi is another bioturbating ecosystem engineer. The picture shows mounds of sediment exhumed from below and piled on the surface by this creature.

Bioturbators clean up some of the messes that we make. For instance, heavy metals that are washed off roads and buildings when it rains attach to sediment particles in stormwater and ultimately deposit in estuaries. They do so at very high concentrations (mass of metal per mass of sediment that the metal is attached to) which would be toxic to most marine life. However, bioturbators mix those highly contaminated layers down into pre-existing sediments, thus diluting the metal concentrations and, in so doing, keeping the bed sediments habitable for marine life.

Microbial life in the water column

Floating in the water column are countless “micro-organisms” (less than 0.2 mm across) that have developed a bewildering variety of ways to feed, get about and reproduce (see 'Estuarine microbial food webs'). This includes phytoplankton (single-celled organisms that, like plants, obtain their energy from the sun by photosynthesis), zooplankton (predatory animal-like organisms that graze on phytoplankton and other micro-organisms), and bacteria. This is a complex world and, tiny though these organisms are, they can affect water quality and, indeed, human health. For instance, phytoplankton can form blooms that kill fish, contaminate shellfish, produce surface scums, and deplete the water of oxygen when they die en masse and rot. Phytoplankton are thought to be kept in check naturally through grazing by shellfish, zooplankton and microzooplankton. However, excessive nutrients in the water (from agricultural runoff, for example) in combination with the right amount of light can stimulate blooms.

Birds are an obvious inhabitant of our estuaries. Less obvious, and pretty remarkable when you think about, is where a lot of them come from. 'Are our estuaries wader-friendly?' tells the story: New Zealand’s estuaries are important destinations for many waders that migrate each year from the other side of the world. For instance, about 30% of the summer population of bar-tailed godwit are thought to have flown in from the East Asia–Alaska–Australasia migratory route. In addition to the itinerants, there are many local bird species. 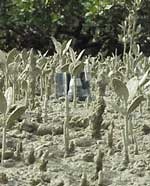 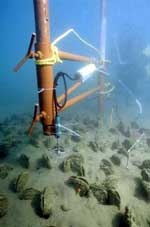 An artificial patch of horse mussels that was planted as part of an experiment to determine how water flow near the bed is affected by the presence of the shells. The instrument in the picture is an acoustic current meter that measures currents and turbulence. [Rod Budd]

Algal scum washed up on a beach. [Malcolm Green]