Such an approach offers a sound but novel way of integrating large amounts of information from a variety of sources, as well as providing predictive capability within an easily understood framework. These models use scientific knowledge on the interactions between variables to describe current distribution and abundance of species and to predict responses to changes in variables (eg a response to increased nutrient levels). We have transformed our conceptual understanding of abiotic and biotic factors influencing the abundance of this species (see koura conceptual model) into numeric descriptors based on the probability of occurrence of different states of these factors.

This model will aid Te Arawa in testing possible scenarios associated with changes in, for example, water quality or predator numbers. This model could also be used to determine appropriate management actions for enhancing or restoring koura to specific lakes and will support Te Arawa’s role as kaitiaki of the lakes. Finally, the model will inform other lake managers of the water quality needs of key species for Te Arawa.

Examples of two possible scenarios can be downloaded by clicking on the icons below.

SCENARIO 1 (TO BE FINALISED)

SCENARIO 2 (TO BE FINALISED) 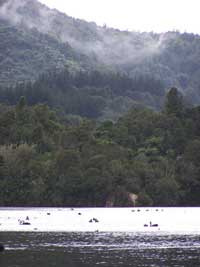