Tsunami is a Japanese word meaning “great wave in harbour” Tsunami are temporary oscillations in sea level with periods longer than wind waves or swell, but shorter than ocean tides. Tsunami are usually created by a sudden movement or rupture of the ocean floor, such as from earthquakes, underwater landslides and underwater volcanic eruptions. They occur a few times a year, but generally we don’t notice them. Larger tsunami can cause coastal flooding, erosion, damage to buildings and loss of life in extreme cases. Remote tsunami are created at large distances from New Zealand and propagate across the ocean allowing some warning time to evacuate vulnerable coastal areas. Local tsunami are created on the continental shelf around New Zealand and therefore give little warning.

New Zealand is located well out into the Pacific Ocean in such a place as to be very vulnerable to remote tsunami generated by earthquakes or underwater landslides along the Pacific Rim, even as far as Alaska. Tsunami from South American sources probably pose the greatest “external” tsunami threat to New Zealand. A graphic reminder of this was the 22–23 May 1960 tsunami from Chile that produced a maximum height of 5.5 m in Lyttelton Harbour, and also affected other harbours along the east coast such as Gisborne (see picture). The largest known tsunami in New Zealand occurred in August 1868 following earthquake fault movement in Chile. This tsunami took 15 hours to travel to New Zealand and had a wave height that reached up to 8 m in parts of the east coast, Particularly Lyttelton.

In recent years, three major seismic events have occurred in the Pacific that generated a tsunami that was subsequently recorded by gauges in the NIWA sea-level network.

More details of these tsunami can be obtained from published articles.

These three recent tsunami events, while small in New Zealand waters, nevertheless remind us all of our nation’s vulnerability to remote tsunami from the northern, eastern and southern flanks. Fortunately, Pacific-wide warnings can in most cases be processed by the Ministry of Civil Defence & Emergency Management many hours in advance via the Pacific Tsunami Warning Center in Hawaii. However, these warnings give arrival times IF a tsunami has been generated, but have no way of estimating the size of the wave. This is a research need recognised in our programme. More general information on Pacific-wide tsunami is available from the NOAA site.

New Zealand is perhaps more at risk from local tsunami, generated “locally” by earthquakes and/or underwater landslides or volcanoes along our plate subduction zones off eastern New Zealand and south-west of South Island. This hazard is high because of the potentially large tsunami wave heights and lack of adequate warning. One example is the tsunami that hit the Gisborne region on 25 March 1947, with heights up to 10 m, probably caused by a combination of fault movement off the coast and an underwater landslide triggered by the earthquake. Unlike remote tsunami, little warning is possible for the pending arrival at the coast because of the close proximity of faulting, the continental plate subduction zone, and volcanoes along our coastline.

NIWA’s research is targeted at pinpointing geological features like previous seabed slumping, landslides and faulting on the ocean floor that may potentially cause a tsunami, and then how and where the resulting tsunami would propagate to the coast. Roy Walters is leading the work on developing novel computer models to simulate the behaviour of sediment-rock-water mixtures in an underwater landslide and the ensuing tsunami.

Read more about how the Sumatra tsunami reached New Zealand.

Sumatra tsunami recorded at 1-minute sampling intervals at 9 sites:
a) Date/time in NZ Standard Time (UTC+12), with earthquake (EQ) time shown.
b) Elapsed time in hours since the earthquake occurred.

Sumatra tsunami recorded at 5-minute sampling intervals at 19 sites:
a) Date/time in NZ Standard Time (UTC+12), with earthquake (EQ) time shown.
b) Elapsed time in hours since the earthquake occurred.

Tsunami run-up height reached up to 12 m in Khao Lak (Thailand) as shown by damage to tiles on roof. 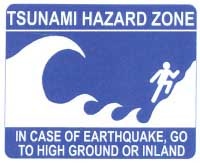