Sumatra tsunami recorded at 1-minute sampling intervals at 9 sites:
a) Date/time in NZ Standard Time (UTC+12), with earthquake (EQ) time shown.
b) Elapsed time in hours since the earthquake occurred.

Sumatra tsunami recorded at 5-minute sampling intervals at 19 sites:
a) Date/time in NZ Standard Time (UTC+12), with earthquake (EQ) time shown.
b) Elapsed time in hours since the earthquake occurred. 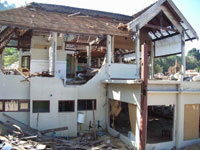 Tsunami run-up height reached up to 12 m in Khao Lak (Thailand) as shown by damage to tiles on roof. (Photo: R Bell) 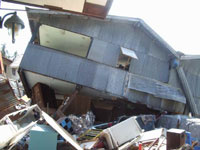 The data you collect is an asset that you need to keep safe for the long term. Make sure you that you have backup copies securely stored in a couple of other locations. Credit: NIWA.

Damaged shops on south side of Kho Phi Phi (Andaman coast, Thailand) where tsunami run-up was up to 6 m. (Photo: R Bell)

The sites in the New Zealand open-coast sea-level network.

On Boxing Day, 26 Dec 2004, a large earthquake (M9.0) occurred off the west coast of Northern Sumatra at 00:59 UTC (12:59 NZST) at a shallow depth in the earth’s crust of only 10 km. The epicentre is shown in the seismic setting (see EMSC map) where subduction of the India Plate occurs beneath the Burma Plate. The release of energy produced a sea-bed surface rupture of over 1000 km in length north of the epicentre up to the Andaman Islands.

Movements of the seabed from models and measurements suggest the seafloor on the western side was uplifted by up to 5 m and shifted horizontally up to 11 m (USGS site), while on the eastern side of the rupture (facing Thailand and Sumatra), the seafloor dropped about 1-2 m. It is these vertical movements that gave rise to the tsunami waves that devastated several countries around the Indian Ocean with the tragic loss of over 280,000 people. Tsunami run-up heights of over 30 m were recorded in Banda Aceh (Sumatra) and up to 12 m in Khao Lak (Thailand). See the interview with one of the team members from NIWA on a Thailand reconnaissance survey in January 2005. The full nzsee_sumatra_tsunami_report.pdf on the Thailand survey describes the findings of the team and the implications for New Zealand.

The tsunami waves travelled around the world including the Pacific and Atlantic Oceans before dissipating. In New Zealand, the tsunami waves first arrived in the South Island about 16.5-17 hrs after the earthquake, having bent around Australia via the Southern Ocean.

The sites in the New Zealand open-coast sea-level network are shown on the map.

The processing behind the tsunami plots started by stripping out the local tides that dominate the sea-level record. Then a wavelet filter was used on the de-tided data to bring out the time-varying tsunami signatures between 2 and 64 minute periods. The tsunami waves measured at other port sites in New Zealand are available from the Mulgor Consulting website. 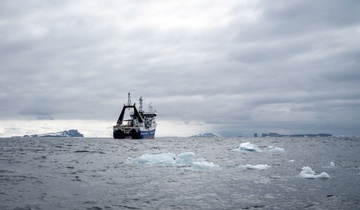