Waves are available from a number of satellite sensors, including radar altimeters and synthetic aperture radar (SAR). 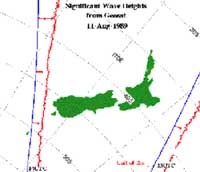 All of the four satellites sampled at a high rate along-track (see picture left), but the spacing of the tracks varied considerably. The satellites are usually in orbital configurations which repeat a fixed lattice pattern of sampling the ocean surface every few days. 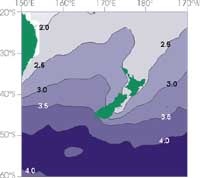 For each satellite mission the data for the oceans surrounding New Zealand (60°S-20°S, 150°E to 170°W) were quality checked and sorted into 2° by 2° latitude/longitude squares. The monthly wave parameters for each mission were then calibrated and combined into a single climatology of monthly mean fields.

The figure on the left shows the overall average of significant wave height (in metres) derived from satellite observations.

The intensity of backscatter is related to surface roughness and incidence angle.