Besides tidal height, the NIWA tide model of New Zealand’s EEZ also produces tidal currents. For the first time, a detailed overall picture has emerged of the strength (speed) and direction of tidal flows on the continental shelf and around various islands, headlands and straits. Click here to see an animation of the twice-daily lunar M2 tidal currents around the top part of the North Island. Typically over much of the continental shelf, tidal currents are quite weak and would be hard to measure accurately. However there are obvious tidal hotspots like East Cape, Cape Reinga and the confines of Hauraki Gulf where strong tidal currents are more evident. These hotspots arise because the tidal flow is constricted by headlands or islands, particularly where the seabed shoals to shallower depths. The effects of strong tidal flows through Cook Strait extend northwards to the bight south of Taranaki.

Over 200 current-meter records of measured ocean currents dating back to 1970 have been re-analysed. Using a technique called “harmonic analysis”, specific tides associated with the Moon or Sun are extracted from the measured currents. These field measurements of tidal currents are being used to verify the tide model. The comparison is very encouraging, given the inevitable variability of extracting small tidal currents from data that is dominated by wind-driven and oceanic currents. For more information, see the Water & Atmosphere article “Ebb and flow: Testing the tides”. The tidal model is in the process of further development with a finer grid resolution nearer the coast and in the larger sounds, fjords and harbours.

Other animations of tidal currents for an average tide range (M2) 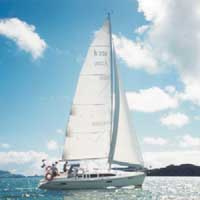 The sea is constantly on the move, driven by tides, winds and changes in temperature and salinity. While ocean currents are being studied in other NIWA programmes, the focus for the coastal hazards programme is on surface currents nearer the coast. Information on surface currents will assist search and rescue operations, oil spill clean-ups, navigation and of course yacht racing. Computer models of tides and wind-driven currents have now been developed for several areas around New Zealand including the greater Hauraki Gulf.

This research is being utilised by racing syndicates for the America’s Cup and the Volvo Ocean Race. Near-surface currents under various wind and tide combinations are being used for America’s Cup race tactics off East Coast Bays. Tidal currents from the NZ Tide Model from Ninety-Mile Beach around Cape Reinga to Auckland, and out to East Cape were used to assist the Illbruck syndicate with navigation in Legs 3 & 4 of the Volvo Ocean Race. In the coming year, a tidal current atlas for New Zealand will be published for hourly intervals relative to the high tide at standard ports.

The tidal current shown here is the main component of currents around Banks Peninsula.

Currents in the Cook Strait are made up of many different components, chiefly the tidal and storm driven currents.

This animation shows the chief tidal current in Foveaux Strait. Tidal currents on the west coast of Stewart Island are small, but around the northern and southern coasts of the island and in Bluff Harbour and Oreti Estuary there are strong tidal currents. Overall currents (not shown here) in Foveaux Strait however, are strongly wind-driven with the prevailing wind being from the west. The Southland current, which carries water from the subtropical convergence west of New Zealand, flows through Foveaux Strait.

Twice-daily M2 tidal currents animation around the North Island of New Zealand based on a TIDE2D model.