There has been significant progress in this project in the nine months from October 2008 to June 2009. The Achievements Timeline below shows several key early stages in the project have been completed, including four council-based workshops, two conference presentations (one oral and one poster), submission of a scientific paper to a peer-reviewed journal, and five project team meetings/workshops. Excellent relationships with the councils have been established, four climate/asset sensitivity matrices have been drafted and four case studies have been determined.

The case studies are closely aligned with three other FRST-funded projects: RiskScape (GNS and NIWA), Regional Climate Modelling (NIWA), and Climate Change and Community Resilience (VUW). The overall structure of the “Toolbox”, the principal output of the project, has been defined and is closely linked with the risk management approach described in the MfE Coastal Hazards and Climate Change Guidance Manual. A detailed project plan has been drafted for 2009/10 and 2010/11. 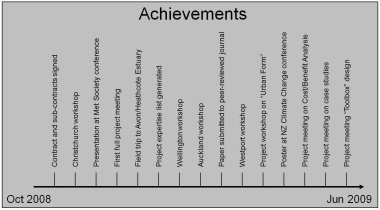 Council-based workshops were held in Westport, Christchurch, Wellington and Auckland (an addition to the contracted case study locations). The workshops were well attended by council staff, councillors, infrastructure operators, and project personnel. The project goals and synergies with other FRST-funded projects were described to the attendees and then they were asked to report on current and planned climate-change related activities at council level. These were highly informative information transfer sessions. Climate¬/Asset sensitivity matrices were drafted at the workshops for all four locations. These matrices, and the fruitful discussions at and following the workshops together with an assessment of project resources, led to the choice of case studies (see below). This work represents the completion and achievement of Milestone 1 (Asset sensitivity to weather and climate) of the project, three months ahead of schedule.

Significant progress has been made on Milestone 2, which involves updating the High Intensity Rainfall Design System (HIRDS) software to a new version (v3). The updated software can be used for any location in New Zealand and will be demonstrated in the Auckland case study, which will focus on heavy rainfall and the capability of the stormwater infrastructure, and in the Wellington case study which will focus on rainfall-induced landslides.

Significant progress has been made on Milestone 3, the rainfall-induced landslide model. This model will be demonstrated in the Wellington case study, which will look at changes to the landslide risk associated with climate change.

The proposed case studies are:

Model current and future flooding of the Buller River, taking into account high-tides, storm-tides and sea level rise; determine the resultant flood inundation in Westport; calculate the likely impacts on infrastructure and buildings in Westport using the RiskScape tool; apply a rapid cost/benefit analysis tool to assess impacts and adaptation options; and demonstrate a detailed cost/benefit analysis on a specific building.