The rate at which carbon dioxide is increasing varies from year to year as shown in Figure 2. The average rate of increase since 1980 is 0.4% per year. The highest rates of increase have typically been in El Niño years.

NIWA has made trace gas measurements at Baring Head (on the South Coast of the North Island near Wellington) since 1973. When the wind blows from the South, Baring Head air has generally had a long trajectory over the ocean. Under such conditions measurements of carbon dioxide, methane and nitrous oxide represent mid-latitude Southern Hemisphere background values, since the sampled air has not been contaminated by sources on the New Zealand mainland. Baring Head is part of a global network of stations for determining trends in greenhouse gas concentrations. The data are collected during southerly winds and represent values typical of the remote ocean regions of the Southern Hemisphere.

In addition, gas samples from Baring Head can also be used to deduce information about greenhouse gas sources, through analyses of their isotopic composition.

NIWA is also measuring various other gases and aerosols which influence the earth’s radiation budget or which affect greenhouse gases through atmospheric reactions. Some of these measurements are being carried out at Baring Head, and measurements higher up in the atmosphere are made at NIWA’s Lauder research station in Central Otago. More information is available on NIWA’s atmospheric research web pages and in the NIWA booklet The Greenhouse Effect – A New Zealand perspective on climate change.

Developed countries that have ratified the Framework Convention on Climate Change, including New Zealand, have made commitments to limit their anthropogenic emissions of greenhouse gases and enhance their greenhouse gas sinks. They have also undertaken to annually report their current emissions and their estimates for the future. If the Kyoto Protocol is ratified, then New Zealand will become committed to limiting the net anthropogenic emissions of greenhouse gases for the period 2008–12 (expressed as “carbon dioxide equivalents) to 1990 emission levels. More information from a New Zealand policy perspective can be found on this New Zealand Government climate change information website.

A concept called the “Global Warming Potential” (GWP) is used in calculating the “carbon dioxide equivalent” of a mix of greenhouse gases. The “global warming” effect of a particular gas depends on how strongly it absorbs infrared radiation, and on how long it stays in the atmosphere. The GWP is a way of summarising these factors. In essence, the GWP describes the number of grams of carbon dioxide that would provide the same “warming” effect over a specified period of time (e.g. 100 years) as one gram of the gas of interest. For example methane has a 100-year GWP of 21, indicating that a given weight of methane released now would have 21 times as much effect on global warming over the next 100 years as would the same weight of carbon dioxide. (Technical definition of GWP: The cumulative radiative forcing between the present and some chosen time horizon caused by a unit mass of gas emitted now, expressed relative to that of carbon dioxide). Table 1 shows GWPs for various greenhouse gases from the 1990-2005 Ministry for the Environment greenhouse gas inventory (Ministry for the Environment, 2007), for a 100-year time horizon.

Table 1: 100-year Global Warming Potentials, from Ministry for the Environment, 2007.

There is international agreement to use a 100-year time horizon for calculating “carbon dioxide-equivalent” emissions. Table 2 shows the estimated anthropogenic emissions of each major greenhouse gas from New Zealand in 1990 and in 2005 (Ministry for the Environment, 2007). Also shown in Table 2 are “CO2 removals”, also known as “carbon sinks”. These refer to changes in land use that result in uptake of CO2, for example through growth of trees or build-up of organic carbon in soils.

Table 2: Emissions and removals of greenhouse gases in New Zealand in 1990 and 2005 presented in carbon dioxide equivalent form using 100-year Global Warming Potentials (GWPs). All amounts are in gigagrams. (A gigagram equals one thousand tonnes). Derived from Ministry for the Environment, 2007.

The IPCC has prepared guidelines for assessing national emissions (IPCC, 2006). However some emissions can be estimated or calculated only to limited accuracy (Penman et al., 2000). In particular, calculated emissions of methane and nitric oxide carry uncertainties because they are generated through biological processes that can be quite variable. NIWA is collaborating with AgResearch and Landcare Research to better define these agricultural emissions for New Zealand. 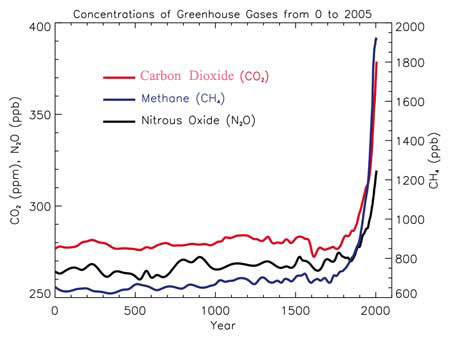 Figure 1: Concentrations of important long-lived greenhouse gases over the last 2,000 years, from measurements on air trapped in ice cores. Increases since about 1750 are attributed to human activities in the industrial era. Concentration units are parts per million (ppm) or parts per billion (ppb), indicating the number of molecules of the greenhouse gas per million or billion air molecules, respectively, in an atmospheric sample. (Figure from Forster et al., 2007). [NIWA]

Figure 3: Estimates of the relative cumulative warming effect over 100 years of New Zealand’s anthropogenic emissions of each of the major greenhouse gases emitted during 2005. Based on figures from Ministry for the Environment, 2007. [NIWA]