It is a 4am, and it is a chilly West Coast morning. I am dressed in a hard hat, jacket and gumboots ready to collect our first set of CTD samples for the day. I am starting to adjust to the early morning starts and have become accustomed to balancing a bottle of water and a thermometer on the open deck of the Tangaroa.

Today we recovered the second mooring. Planning for this started early in the day with a ‘toolbox’ meeting between Joe, our voyage leader (who is a Coastal Physicist) and the crew regarding this recovering. Toolbox meetings are held regularly to ensure that science staff and crew can plan ahead for all CTD sampling and as well as planned recoveries.

We arrive at the site of the second mooring around 8:00am. A bonus of getting up so early is seeing a West Coast sunrise that sets the sky on fire with yellow and orange streaks. Not to mention a group of dolphins swimming alongside the vessel back dropped by the breath taking scene of Southern Alps covered in snow. Amazing. 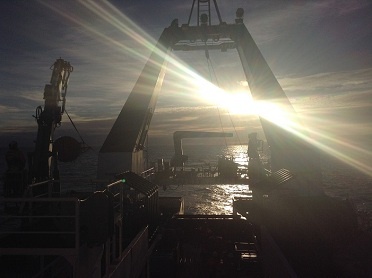 The third mooring is also recovered. Communication between science staff and the crew is critical to making this a smooth operation. Down on deck Mike and Fiona work with the crew to physically retrieve the mooring onto the boat safely. Up on the bridge Joe, Evan and Daniel (2nd Mate) monitor the moorings while they remain in the water. Evan guides Daniel as he moves the boat into a position alongside the mooring. There is communication between Daniel and a crew member on the deck that assists a successful retrieval of the final mooring. All in all, today has been fantastic. I’ve undertaken sampling and I’m beginning to see how measurements such as salinity contribute to our understanding about sea density. This understanding helps us to know more about flow in the West Coast area and how they impact on currents locally. Critically, I’ve been able to see first-hand how effective communication between science staff and crew is key to making a science voyage at sea run according to plan.

Weather is the unknown variable, as is equipment at times. So flexibility is key. Great team effort all round!