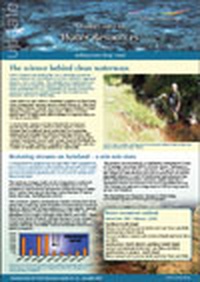 NIWA geologists have mapped more vast underwater canyons off South Westland, including the biggest yet.

Multibeam sonar mapping of the Hokitika and Cook Canyons from RV Tangaroa in 2005 revealed complex, meandering rivers and deep ravines which dwarf any features seen on land in New Zealand. A follow-up voyage in September–October 2007 mapped several canyons further south, including the enormous, steep-sided Moeraki Canyon, which is up to 5 km wide and 800 m deep at its largest point. The floor of the canyon contained river stones up to 10 cm in diameter that have been washed 200 km from the Southern Alps.

The canyon systems mapped so far cover an area of about 30 000 square kilometres – six times the area of the Grand Canyon – “but that’s probably less than a third of their total extent,” says NIWA marine geologist Dr Helen Neil.

The research, funded by the Foundation for Research, Science & Technology, is investigating how changes in climate affect the type and amount of sediment that ends up in the oceans.