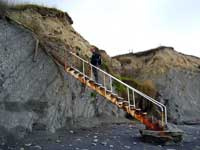 Mahia Peninsula, at the northern end of Hawke’s Bay, is renowned for its beautiful beaches and spectacular surf. But sedimentation is a big problem on some parts of the coast. The water is clouded by fine mud, and nearshore marine habitats such as rocky reefs are blanketed in sediment. Gathering of kaimoana by the local community is also badly affected.

NIWA scientists are working with the local Mahia Coastal Management Strategy to establish where this perennial nuisance sediment comes from. Possibilities include eroding sea cliffs and hills in the local catchments, and sediment loads deposited in the sea by rivers further afield and transported to Mahia by ocean currents.

Sidescan sonar surveys have mapped the distribution of nearshore sediments, rocky reefs, and macroalgal communities both outside and inside two of the rāhui (conservation areas) along the northern side of the peninsula.

"We have also been looking at coastal erosion rates, the local geology and hillslope characteristics, and have used empirical formulae to predict stream sediment discharges," says NIWA’s Sheryl Miller. A review of the influence of historical landuse on catchment sediment yields has also been undertaken. Results to date suggest that erosion of local coastal and catchment mudstone is the prime sediment source.

The project is funded by the Foundation for Research, Science & Technology through NIWA’s Capability Fund. The present reconnaissance phase of the work will be completed in 2007.