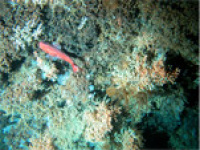 An orange roughy swims above a stony coral reef on the Pyre seamount, northern Chatham Rise, at a depth of 1020 m.

RV Tangaroa spearheaded the first of the Government’s Ocean Survey 20/20 (OS 20/20) projects last month with the first of three voyages to the Chatham Rise and Challenger Plateau.

OS 20/20 is a long-term Government strategy to survey and explore New Zealand’s oceans, including those around Antarctica, to better manage and sustainably use their resources.

Little is known about the biodiversity of New Zealand’s offshore seabed communities, particularly at productive depths where commercial fisheries occur. One of the objectives of OS 20/20 is to better understand the role these communities play in the wider marine environment and in sustaining fish resources.

This year’s project is a seafloor habitat and biodiversity comparison between the Chatham Rise and Challenger Plateau. These two elevated plateaux have similar water depths, but appear to have completely different ocean productivity and fisheries resources – both are higher on the Chatham Rise.

The first voyage was a multibeam mapping survey across both plateaux to form a ‘roadmap’ for further seafloor and video sampling voyages in early 2007. It revealed a number of new seafloor features, including pockmarks, iceberg scours, and small extinct submarine volcanoes along the Chatham Rise.