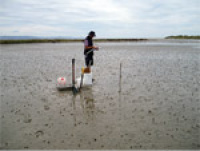 Environment Canterbury (ECan) commissioned NIWA to survey the central and southern portion of the Ashley Estuary following its designation as an Area of Significant Natural Value.

The survey was to provide baseline information on the estuary’s intertidal sediments and associated biota (plant and animal life), and to compare the current state of the sediments with their condition when last surveyed in 1982.

The scientists recorded sixteen species of invertebrates, noting marked differences in species composition between sites. The density and diversity of invertebrates were similar to those of other relatively uncontaminated estuaries in the South Island.

This survey has established a robust baseline for future monitoring of this dynamic estuary.