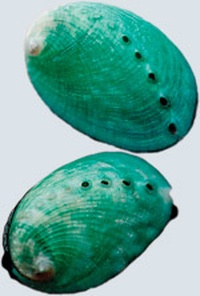 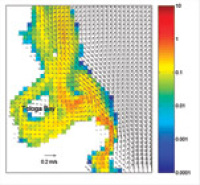 This map shows a snapshot of modelled larval distribution. Blue areas have the least larvae; red areas have the most. The arrows show the direction and speed of currents. An eddy has formed in the lee of the headland at the entrance to Tolaga Bay and larvae are concentrating near the centre of the eddy.

Shellfish larvae are transported along the coast by marine currents, but how far do the larvae spread and how effectively do they settle? These questions have implications for the location of marine reserves.

NIWA has been working with the Department of Conservation, using numerical modelling to study how currents carry larval paua on the Gisborne open coast.

This work was funded by the Foundation for Research, Science & Technology.